2 blasts add to woes in Baghdad 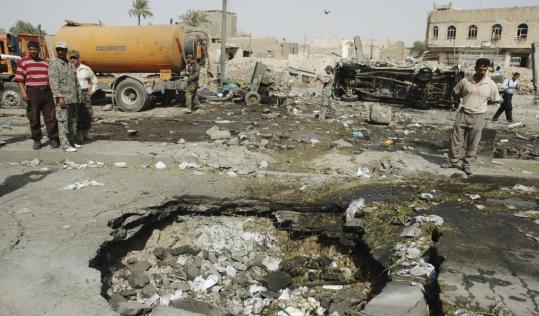 BAGHDAD - A pair of car bombings, at least one of them a suicide attack, killed 26 Iraqis and injured dozens in Baghdad yesterday, Iraqi security and hospital officials said.

The US military put the death toll at 11. The reason for the discrepancy was not immediately clear.

The violence came despite stepped-up security for the visit to the Iraqi capital of President Mahmoud Ahmadinejad of Iran but did not affect his trip.

The number of attacks has dropped more than 60 percent since the US military completed a buildup of 30,000 additional troops last summer, according to US figures. But the toll of violent deaths has started to inch up in recent weeks, boosted by a few seemingly carefully planned bombings.

In yesterday's worst attack, police said the bomber drove an explosives-laden car into a checkpoint manned by Iraqi soldiers and members of a neighborhood security group, killing at least 22 people and injuring 42, police and hospital officials said.

The US military said the bomb was placed in a parked car and put the toll at nine dead and seven wounded.

Ahmed Naim was at work at a hardware store when the explosion happened in a busy downtown street on the east side of the Tigris River.

"I saw a fireball in front of the shop," he said. "The whole place shook. I felt a hot liquid on my body, then I saw it was blood covering my face and hands."

Naim fainted and woke up at Medical City hospital, where staff removed thick shards of glass from his face, shoulder, and other parts of his body.

"The owner of the shop replaced the glass front of the shop with a thicker type fearing the explosions," Naim said ruefully in a telephone call.

He said hospital staff were battling to cope with the flood of casualties, treating some patients on the floor because there were insufficient beds.

Businessmen helped ferry the dead and wounded to hospital, but they said the concrete barriers set up to deter such attacks made it difficult to reach the victims.

"Some of them died as we were taking them to the cars," said Sabri Hassan, who owns a nearby store.

In another part of east Baghdad, an explosives-packed minibus driven by a suicide bomber exploded at a checkpoint, killing four Iraqis and injuring 10, according to Iraqi police.

In other violence, the US military reported the discovery Sunday of a grave containing 14 bodies south of Samarra. The victims were believed to be members of the Iraqi security forces or one of the local guard groups known as Sons of Iraq, the military said in a statement. They had their hands tied behind their backs and gunshot wounds to their heads.