7 others die, including his wife and children 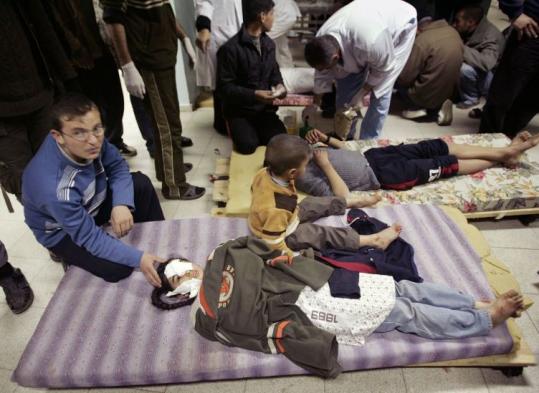 GAZA CITY, Gaza Strip - Eight people were killed, including a commander of the Palestinian Islamic Jihad movement, and about 40 were wounded when an explosion destroyed the militant's house in the Gaza Strip late yesterday, a group spokesman and local medics said.

Islamic Jihad said an air strike caused the blast, which also killed three other militants and the wife and two young children of the commander, Ayman Fayed, better known as Abu Abdallah.

The Israeli Army denied any involvement. A senior figure in the Jihadist movement linked the explosion to Israeli threats to kill senior militants it holds responsible for rockets fired into Israel, and to this week's killing in Damascus of a top commander of Lebanon's Hezbollah group.

"We will respond to this Zionist massacre painfully," said Abu Ahmed, a spokesman for Islamic Jihad's armed wing.

Relatives said a 5-year-old son and 7-year-old daughter of the 42-year-old Fayed were killed. Three of his other children were wounded.

Rescuers combing the rubble of Fayed's house found one body three hours after the blast, which also damaged nearby homes.

Some residents of the al-Bureij refugee camp said they believed there had been an air strike. Others said they heard no aircraft noise or other indications before the explosion.

Witnesses at the scene said they saw debris among the rubble of what looked like the locally manufactured rockets the Islamic Jihad and other groups fire at Israeli towns.

Israel has used air strikes on cars in Gaza to kill a number of militants lately, but has not bombed a house there since 2006. Militants also have been killed in accidental explosions and faction fighting, while some Palestinians also accuse Israel of using undercover methods to set off explosions in the enclave.

A rocket strike on the Israeli town of Sderot a week ago wounded an 8-year-old boy, increasing public pressure on the Israeli government to respond to the daily attacks. Ministers have said they may step up attacks on senior leaders in Gaza, where Hamas Islamists, allied to Islamic Jihad, seized control in June from the Western-backed Palestinian Authority.

A senior Islamic Jihad political leader, Khaled al-Batsh, said Israel was behind the bombing that killed Fayed and linked it to the car bomb in Damascus that killed Hezbollah commander Imad Moughniyah - for which Israel also denied responsibility.

Prime Minister Ehud Olmert of Israel is pursuing a new, US-sponsored peace process with President Mahmoud Abbas, whose Palestinian government is based in the occupied West Bank. Israel and Abbas have refused to talk to Gaza's Hamas leaders, and Israel has all but sealed the enclave's 1.5 million people inside its borders.

Hamas said yesterday that it has told Egyptian officials it would consider a cease-fire with Israel if it lifted its blockade of the Gaza Strip and halted military operations in all Palestinian territories.

In a separate development yesterday, senior UN official John Holmes visited Gaza and said he found "a grim human and humanitarian situation" in the coastal enclave and called for the blockade to be lifted.

"People are not able to live with the basic dignity to which they are entitled. . . . What is essentially needed is an opening of the crossings . . . so that people can start to live more normal and more dignified lives," said Holmes, the undersecretary general for humanitarian affairs.

Sources close to Hamas said Egypt, which brokered a yearlong truce between the Islamist group and Israel in 2005, had wanted to explore Hamas's position before holding any talks with Israel.

Leading Hamas member Mahmoud al-Zahar traveled to Egypt Thursday to resume talks with the Egyptian government about the Gaza Strip and Egypt border.