Israel to ease Gaza blockade, after decline in attacks

Shipments will depend on need, and rockets fired 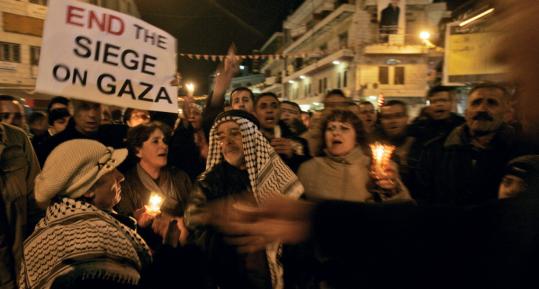 GAZA CITY - Israel agreed to allow limited supplies of fuel, medicine, and food into the Gaza Strip today, easing a blockade that left large parts of the Palestinian territory without electricity and drew international protests.

The promise of relief also followed a sharp decline in the rocket attacks from Gaza that had prompted Israel to halt the shipments Thursday.

Residents of Gaza City spent a second night in cold, darkened homes after the coastal enclave's only power plant shut down Sunday. The city's main hospital, down to its last two days of generator fuel, delayed nearly half the surgeries scheduled for yesterday. Bakeries and gasoline stations closed.

The shipments authorized yesterday by Defense Minister Ehud Barak include enough diesel fuel to run the power plant for a week and the hospital generators for three days, as well as a supply of cooking gas and 50 truckloads of food and medicine.

Israeli officials said future shipments would depend on assessments of Gaza's humanitarian needs and on the number of rockets fired from Gaza. The territory is governed by the radical Islamic group Hamas, which advocates Israel's destruction.

"We hope Hamas has got the message," Israeli Foreign Ministry spokesman Arye Mekel said. "When they want to reduce the number of rockets they can do it."

Hamas political leaders offered no explanation for the decline, a decision they said was made by the group's military wing. A Hamas spokesman, Sami Abu Zuhri, said foreign pressure had prompted Israel to ease the blockade, "but this does not mean the end of the siege on Gaza."

Protests against the blockade came from the European Union, the United Nations, the Oxfam relief agency, the Arab League and Egyptian President Hosni Mubarak. They criticized what they called Israel's "collective punishment" of Gaza's 1.5 million people.

Barak said Israel "must apply more and more pressure on Gaza" to enable Israeli border communities to "live in quiet."

"If this 'quiet' requires the other side to live in 'noise,' then there will be noise," Barak told a forum at a security conference in Israel. "I know this is difficult. However, I care more about our quiet than about theirs."

Israeli Prime Minister Ehud Olmert said he would not push Gazans into a humanitarian crisis but warned that they won't be allowed to live a "pleasant and comfortable life" as long as the rockets keep coming.

"As far as I'm concerned," he told a group of legislators, "Gaza residents will walk, without gas for their cars, because they have a murderous, terrorist regime that doesn't let people in southern Israel live in peace."

Israel halted most commerce with Gaza in June after Hamas seized full control of the territory, expelling secular forces loyal to Palestinian Authority President Mahmoud Hamas, who is holding peace negotiations with Israel.

The pressure tightened in October when Israel began reducing shipments of fuel to the power plant, which provides electricity to most of Gaza City's 400,000 people and about one-third of the coastal strip. The rest of Gaza receives electricity directly from Israel and Egypt, which did not cut those supplies.

Last week's blockade, provoked by a surge in rocket attacks, caught Gaza with less than a week's supply of basic foods that are distributed to about three-fourths of the population by the United Nations Relief Works Agency and the World Food Program.

The blockade put Egypt in a bind. Hamas demanded that Mubarak open Egypt's border with Gaza to let in the supplies cut off by Israel. But Mubarak, worried about a possible spillover of Hamas-inspired militants into Egypt, has been cooperating with Israel and the United States by tightening the border to reduce the flow of weapons and money to the Hamas-led government.

There was no sign yesterday of a change in that policy. Instead, Mubarak telephoned Olmert and "stressed the need to stop the Israeli aggression against the Palestinian people," according to Egypt's official news agency, Mena.

Egypt reportedly sent as many as 300 extra police and security officers to its border with Gaza after Hamas militants threatened to break through the only crossing. Sixty empty fuel trucks lined the Gaza side as their drivers demanded to get through. Hundreds of Gazans, including doctors in white coats and ambulance drivers with their vehicles, staged a protest rally nearby.