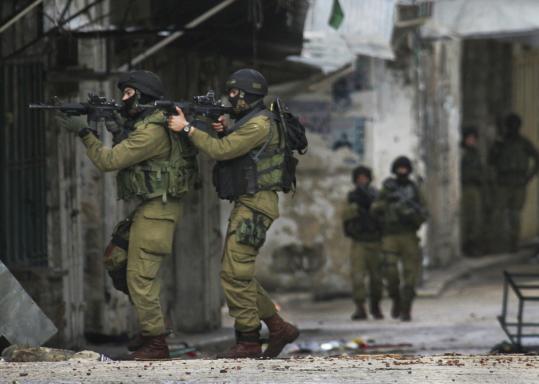 Israeli soldiers made their way through alleyways during a sweep of militants and munitions in Nablus yesterday. Twenty militants were arrested in the four-day army operation. (Nasser Ishtayeh/Associated Press)
Email|Print| Text size – + By Ali Daraghmeh Associated Press / January 6, 2008

NABLUS, West Bank - Israeli troops wound up a four-day sweep of wanted men and munitions caches in the West Bank town of Nablus yesterday, and residents who were confined at home since the start of the operation ventured outside to survey the damage and resume their normal lives.

Palestinian officials said more than 40 people were wounded in the operation, which together with ongoing Israeli-Palestinian clashes in Gaza, has cast a shadow on President Bush's visit, which starts Wednesday.

A leading Palestinian militant was hiding under a house where the Israeli military detonated seized explosives yesterday. But he was pulled out of the rubble unharmed and paraded through the streets on the shoulders of cheering supporters.

The military confirmed that the raid had ended but would not say whether it had targeted the militant, Abu Ghazalah, whose Knights of the Night group is loosely affiliated with the Fatah movement of Palestinian President Mahmoud Abbas.

"These are essential defensive measures being taken against an ever-growing terrorist infrastructure, one which continuously plans and perpetrates attacks against Israelis," said David Baker, Israeli government spokesman.

Israel doesn't think the Palestinian security services are ready yet to quell militant groups and, therefore, conducts its own operations against West Bank extremists, but Palestinian officials contended that Israel's tactics are heavy-handed.

Tear gas and concussion grenade canisters littered the streets of the Old City, where dozens of shops had been forced open by explosives or chopped open by troops.

Hundreds of soldiers patrolling on foot or in jeeps had barged into homes and shops since Wednesday night. As food supplies dwindled, some 30,000 people in Nablus's center and the Old City were placed under curfew, but the streets had been largely deserted throughout the operation because residents were fearful of the raiding troops.

Twenty militants were arrested as of yesterday, and the military reported the discovery of a hidden store of weapons with rocket-making materials, an explosives laboratory, an explosives belt, and ammunition.

Bush will arrive in Israel on Wednesday for his first visit to the nation, which is one of America's closest allies. He also will stop in the Palestinian-governed West Bank, which he toured in 1998, and make his first visits to Kuwait, Bahrain, the United Arab Emirates, and Saudi Arabia.

Bush plans a brief stop to the Red Sea resort of Sharm el-Sheik, Egypt, which he visited in 2003. There also are expectations that Bush will go to Iraq and possibly Lebanon, but the White House has not confirmed this.

In the seven years of his presidency, Bush has avoided becoming directly involved in the Mideast negotiating process. His primary goals for the trip are to try to build momentum for the troubled peace talks and to encourage broader Arab-Israeli reconciliation. Only Egypt and Jordan now have peace agreements with Israel.

The trip also is intended to reaffirm the US commitment to the region and efforts against terrorism.

The United States sponsored a Mideast conference in Annapolis, Md., last month in an effort to revive the peace talks, which have been stalled for more than six years. It was attended by representatives from Israel and an array of Arab nations in the region.

In his weekly radio address yesterday, Bush said that in addition to trying to keep the momentum going for a peace agreement, he would try to push his broader campaign for democracy in the Mideast.

The democracy movement is unpopular with leaders in countries such as Saudi Arabia, Egypt, Jordan, and the Persian Gulf states.