Iran's supreme leader says no to thaw in US relations

Says time is not right, citing fear of espionage 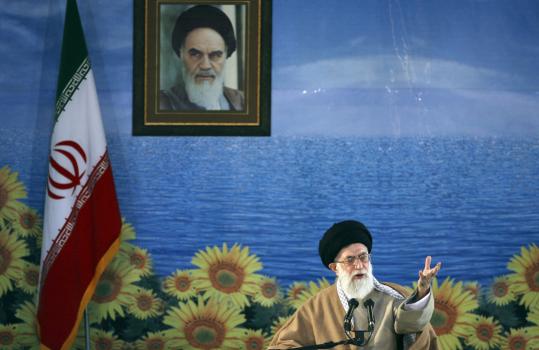 Ayatollah Ali Khamenei, who spoke yesterday to students in the central Iranian city of Yazd, said said renewing US diplomatic ties at this time is not advisable for his country. (Morteza Farajabadi/Associated Press/ISNA)
Email|Print| Text size – + By Nasser Karimi Associated Press / January 4, 2008

TEHRAN - Iran's supreme leader said yesterday that he was willing to restore diplomatic relations with the United States, but doing so now would make his country more vulnerable to US espionage.

"I would be the first one to support these relations," state radio quoted Ayatollah Ali Khamenei as saying at a student group meeting in the central Iranian province of Yazd.

"Of course we never said the severed relations were forever," added Khamenei, 69, who has final say in all state matters. "But for the time being, it [restoring ties] is harmful and we should not pursue it."

Khamenei said restoring ties with the United States now would "provide an opportunity for security agents to come and go, as well as for espionage."

"It has no benefit for the Iranian nation," he added. It would be an "opportunity for US infiltration, traffic of their intelligence agents and espionage on Iran."

The United States and Iran have had no diplomatic ties since shortly after the 1979 Islamic Revolution, when militant students seized the US Embassy in Tehran and published sensitive documents they found inside that documented US intelligence-gathering in the country. The embassy, labeled the "Den of Spies," is occasionally open to the public as a museum documenting American misdeeds in Iran and the region.

The Swiss embassy now represents the United States in Tehran, while the Iranians have a small diplomatic office in Pakistan's embassy in Washington.

Iran last year charged that it had uncovered spy rings organized by the United States and its Western allies, and detained four Iranian-Americans who were later released.

The arrests prompted the United States to warn its citizens against traveling to Iran, accusing authorities there of a "disturbing pattern" of harassment.

The dispute over Iran's nuclear program and US allegations of Iranian support for armed groups in Iraq have further raised tensions.

Washington has refused to hold talks with Iran over the issue of diplomatic ties until Tehran suspends uranium enrichment, a process that can be used to produce fuel for both nuclear energy and weapons.

But the two countries have held three rounds of ambassador-level negotiations on security in Iraq, breaking the 28-year diplomatic freeze.

Iran says its nuclear program is intended solely for energy production, and Khamenei reiterated yesterday that his country would continue to pursue it to generate some 20,000 megawatts of electricity in the next two decades.

Washington's push for a third round of UN sanctions against Iran was undermined by the release of a new US intelligence report in December, saying that Tehran suspended development of nuclear weapons development under international pressure in 2003. It was a dramatic turnaround from the previous US stance that Iran restarted the program in 2005.