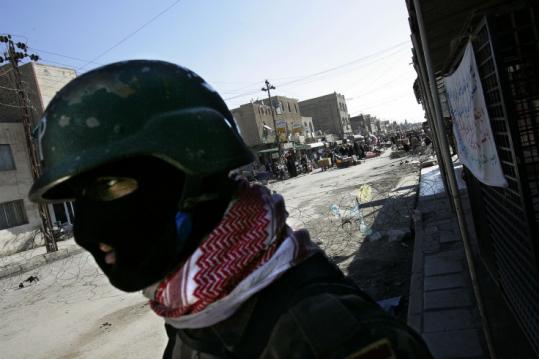 BAGHDAD - Iraq's defense minister promised yesterday to wage a new crackdown in a volatile province northeast of Baghdad where militants are trying to regroup after being routed from their urban stronghold there last summer.

Suicide attacks have killed more than 20 people in the last three days in Diyala Province, a tribal patchwork of Sunni Arabs, Shi'ites, and Kurds that stretches from Baghdad to the border with Iran. Defense Minister Abdul-Qader al-Obeidi said preparations had begun for a fresh military operation in the provincial capital, Baqubah, about 35 miles from Baghdad.

"If we succeed in controlling areas of Diyala close to Baghdad, the rate of incidents in Baghdad decreases by 95 percent," Obeidi told the Associated Press.

Prime Minister Gordon Brown of Britain arrived in southern Iraq on a surprise visit to the southern city of Basra, signaling what London hopes will be the transition from a military mission in Iraq to one with a stronger economic component, aimed at reinvigorating a country torn apart by war and years of neglect under Saddam Hussein.

"We have managed now to get Iraq into a far better position," Brown told British troops, who lined the staircases of an airport base to watch his evening arrival. "Not that violence has ended, but we are able to move to provincial Iraqi control and that's thanks to everything you have achieved."

The British plan to hand over security responsibilities for the oil-rich area to the Iraqis within weeks.

Violence has declined sharply in Iraq since June, when the influx of US troops to the capital and its surrounding areas began to gain momentum. Also credited with the decline were the freeze in activities by the Mahdi Army militia, led by the radical Shi'ite cleric Moqtada al-Sadr, and the decision by tens of thousands of Iraqis - most of them Sunni Arab - to join the fight against Al Qaeda.

But it has been a constant challenge to subdue extremists in Diyala, which is the eastern gateway to Baghdad. More than two years ago, US forces thought they had turned the corner and American commanders handed over substantial control of the province to the Iraqi Army in August 2005.

A year later, the Al Qaeda-backed Islamic State of Iraq declared Baqubah as its capital.

This summer, US and Iraqi forces launched a new drive in Diyala, and the Americans have fostered groups of former militants who have switched sides in the fight against Al Qaeda. But any gains are hard-won: On Friday, a pair of suicide bombings less than 10 miles apart killed at least 23 people - more than half of them members of the anti-Al Qaeda groups.

Maamouri was politically independent and had a reputation for leading crackdowns against militia fighters and resisting pressure from religious and political groups to release favored members.

Sunnis have been turning against Al Qaeda in significant numbers and signing up for US-backed security volunteer forces, which Rear Admiral Gregory Smith, a US military spokesman, said now number 72,000. That represents a sea change in attitudes among Sunnis, who spearheaded the insurgency against the United States and its allies in 2003 while many Shi'ite politicians worked with the Americans.

But as Shi'ite militias drove thousands of Sunnis from Baghdad and other areas, many in the Sunni community have reached out to the Americans as protection against the rival sect.