Two-day toll in Iraq is at least 35 lives 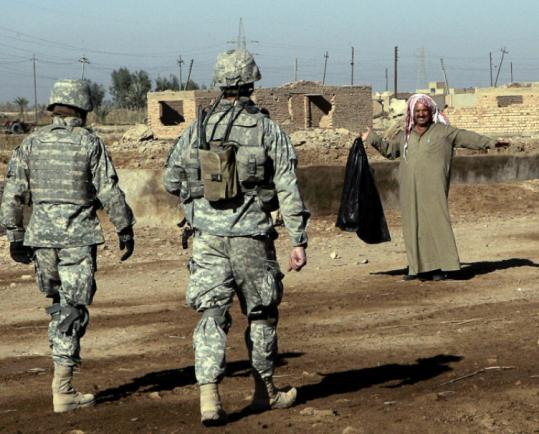 An Iraqi showed US soldiers yesterday in Baqubah that he had no weapon. In one attack in the city, a bomber killed six. (GIANLUIGI GUERCIA/AFP/Getty Images)
Email|Print| Text size – + By Damien Cave New York Times News Service / November 28, 2007

BAGHDAD - American troops killed at least five people, including a child, when they fired on vehicles trying to drive through roadblocks in two separate episodes in Iraq in the past two days, military officials and witnesses said yesterday.

In further violence across Iraq, at least 30 other people were killed or found dead. In one attack yesterday, a suicide bomber in Baqubah claimed the lives of three women and three policemen.

One of yesterday's shootings involving American soldiers occurred on a main road in Shaab, a neighborhood of northern Baghdad dominated by the Mahdi Army, the Shi'ite militia loyal to the cleric Moqtada al-Sadr.

In the shooting, American soldiers fired on a minibus that was traveling on a street where only cars were allowed to pass, said Lieutenant Justin Cole, a military spokesman.

In an e-mail, Cole said that the driver had failed to heed a warning shot and that two passengers in the minibus were killed and four wounded. An Interior Ministry official said four people were killed; a witness said three were women.

Witnesses said the bus was filled with workers on their way to a branch of Al-Rasheed bank. One witness said the driver may not have realized that buses were not allowed on the street because it was rush hour, around 8:30 a.m.

Another shooting occurred Monday during a military operation near Baiji, north of Baghdad. In a statement, the American military said two men in a vehicle approached a blocked road at high speed and did not stop when requested, nor when soldiers fired warning shots. "The ground force engaged," the statement said, "killing both men."

The soldiers later discovered that they had wounded a child, who was a passenger and who later died after being transferred to an American military hospital.

There has been a recent storm of criticism about private security contractors who have fired on and killed Iraqi civilians in a series of high-profile cases. A common situation involves Iraqis shot in their cars after they approach armed convoys, and episodes of a similar nature involving American soldiers are not uncommon.

Most of Iraq's more typical violence yesterday occurred north and west of the capital. In Baqubah, the capital of Diyala Province to the north, a suicide bomber blew himself up near a police command center downtown, killing six and wounding 10, security officials said. The bomber was disguised as a shepherd and was herding several sheep toward a checkpoint when he blew himself up, Reuters reported.

A second suicide bomber, identified by police as a woman, blew herself up near an American military patrol, wounding five Iraqis, including two children. No American casualties were reported.

Farther north, near Tikrit, the police found four bodies. In and around Kirkuk, a policeman was shot and killed, and authorities found two unidentified bodies.

To the west, in Anbar Province, a rocket hit a crowded market in Haditha, killing at least five people and wounding 30 more.

Lieutenant Mohammad al-Nimrawi of the Haditha police force said the rocket appeared to have been aimed at a joint base of Iraqi and American forces nearby.

In Baghdad, police found three bodies across the city. A grenade killed a woman in the southern neighborhood of Dora, while two roadside bombs and a gun battle in Saydia left at least 10 people wounded.