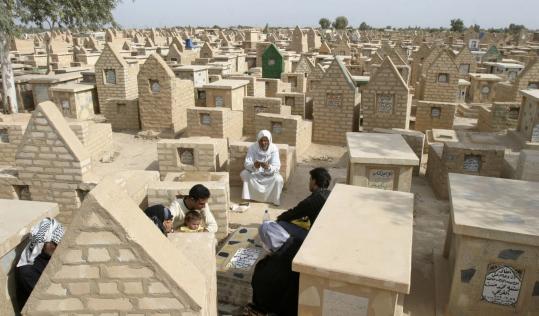 Karbala residents visited the tomb of loved ones yesterday. As Iraqi civilian and US military casualties have declined in the last two months, cemetery officials have also reported sharp falls after a relentlessly high flow of victims in the previous year. (Mushtaq Muhammad/Reuters)
Email|Print| Text size – + By Ned Parker Los Angeles Times / November 16, 2007

BAGHDAD - Iran appears to be honoring an informal pledge to halt the smuggling of explosives and other weapons into Iraq, contributing to a drop of bombings by nearly a half since March, a senior US general said yesterday.

"We have not seen any recent evidence that weapons continue to come across the border into Iraq," Major General James Simmons said. "We believe that the initiatives and the commitments that the Iranians have made appear to be holding up."

Bomb attacks have dropped from 3,239 incidents in March to 1,560 in October, their lowest level since September 2005. The majority of attacks are occurring north of Baghdad, from the town of Taji, just outside the capital, to the provinces of Nineveh and al-Tamim, he said.

Simmons, the deputy commanding general of the Multinational Corps in Iraq, defined attacks as bombs that explode or were found before they detonated.

The reduction of such attacks coincides with the overall decrease in violence since the start of the Baghdad security plan, which saw an additional 28,500 American soldiers arrive in Iraq from February to June.

Al Qaeda in Iraq and splinter groups from Shi'ite cleric Moqtada al-Sadr's Mahdi Army militia are behind many of the attacks still occurring, Simmons said.

Iranian officials have long denied the government in Tehran has played any role in smuggling weapons into Iraq. President Mahmoud Ahmadinejad of Iran assured Prime Minister Nouri al-Maliki of Iraq during an August meeting in Tehran that Iran would crack down on any weapons coming across its borders.

The United States has accused Iran of providing armor-piercing bombs, called explosively formed penetrators, and rockets to the Mahdi militia. EFPs, which can puncture a tank, are among the deadliest weapons US troops face.

Simmons' comments were among the most upbeat so far by an American official regarding Iran's alleged role in Iraqi violence. On Nov. 2, Defense Secretary Robert M. Gates also noted Iran's pledge but stressed that Washington needed to wait and see. US Ambassador to Iraq Ryan Crocker told reporters last month that rocket and mortar attacks by the Mahdi militia on the Green Zone had diminished but that it remained unclear what role Iran's pledge might have played.

Last week the military released nine Iranian detainees from its custody, including two men the Americans had charged with belonging to the Quds Force, an elite branch of Iran's Revolutionary Guard. Iraq's foreign minister, Hoshyar Zebari, said he is hopeful a fourth meeting of US and Iranian officials regarding Iraqi security would take place this month.

Amid the news of a reduction in the number of bombings, the senior British commander in southern Iraq told reporters in Baghdad on Thursday that attacks against British security forces in Basra province had fallen to about one-tenth of the number they had been before September, when his troops moved from bases in the city to the nearby airport.

"The motivation for attacking us was gone, because we're no longer patrolling the streets," said Major General Graham Binns. Although the attacks against British troops have diminished, violence by militias and criminal gangs against ordinary Iraqis is still pervasive in Basra.