18 killed in battle north of Baghdad 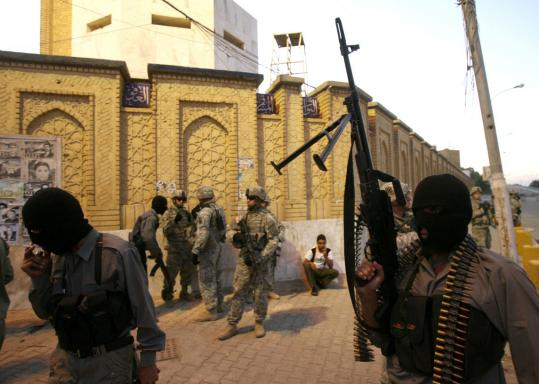 BAGHDAD - Former Sunni insurgents asked the United States to stay away, and then ambushed members of Al Qaeda in Iraq, killing 18 in a battle that raged for hours north of Baghdad, an ex-insurgent leader and Iraqi police said yesterday.

The Islamic Army in Iraq sent advance word to Iraqi police requesting that US helicopters keep out of the area because its fighters had no uniforms and were indistinguishable from Al Qaeda, according to the police and a top Islamic Army leader known as Abu Ibrahim.

Abu Ibrahim said his fighters killed 18 Al Qaeda militants and captured 16 in the fight southeast of Samarra, a mostly Sunni city about 60 miles north of Baghdad.

"We found out that Al Qaeda intended to attack us, so we ambushed them at 3 p.m. on Friday," Abu Ibrahim said. He would not say whether any Islamic Army members were killed.

Much of the Islamic Army in Iraq, a major Sunni Arab insurgent group that includes former members of Saddam Hussein's Ba'ath Party, has joined the US-led fight against Al Qaeda in Iraq along with Sunni tribesmen and other former insurgents repelled by the terror group's brutality and extremism.

An Iraqi police officer corroborated Abu Ibrahim's account, but said police officers were not able to verify the number of casualties because the area was still too dangerous to enter.

Before the battle, the insurgent commander personally contacted Iraqi police in Samarra to tell them his plans, according to the officer and Abu Ibrahim. He asked that Iraqi authorities inform the American military about his plans, and requested that no US troops interfere, they said.

The US military said yesterday that it had no record of American troops ever being informed about the operation, and it was unclear whether Iraqi police followed through on Abu Ibrahim's request.

The police officer said the Al Qaeda captives would not be transferred to Iraqi police.

Instead, he said, he believed the Islamic Army would offer a prisoner swap for some of its members held by Al Qaeda. The officer spoke on condition of anonymity because of the situation's sensitivity.

About 60 militants were captured and handed over to Iraqi soldiers, an Army officer said on condition of anonymity because he was not allowed to speak to media.

Afterward, hundreds of people paraded through Buhriz, about 35 miles north of Baghdad, witnesses said. Many danced and fired their guns into the air, shouting "Down with Al Qaeda!" and "Diyala is for all Iraqis!"

Like the Islamic Army, the 1920s Revolution Brigades includes former members of Saddam Hussein's Ba'ath Party and officers from his army. Hundreds of 1920s members now work as scouts and gather intelligence for American soldiers in Diyala.

And at Baghdad's most revered Sunni shrine, the Abu Hanifa mosque, voices blasted from loudspeakers yesterday urging residents to turn against Qaeda: "We are your sons, the sons of the awakening, and we want to end the operations of Al Qaeda."

The backlash against Al Qaeda among Iraq's Sunni Arab community began in Iraq's western Anbar Province last year. Americans recruited Sunni sheiks to help oust Al Qaeda from their home turf, and the movement spread to former militants who once fought US and Iraqi soldiers.

Along with a US force buildup of 30,000 troops, the Sunni fighters are credited with wresting neighborhoods back from the terror network, yielding a sharp drop in violence here in recent months.

Also yesterday, the US military announced the death of another American soldier, killed a day earlier in an explosion in Diyala. Three others were wounded in the blast, it said.

Twenty people were killed or found dead across Iraq, including four civilians who died on minibuses hit by roadside bombs on their way to work, police said.

The US military also said its troops detained 10 suspects in raids across central and northern parts of the country.