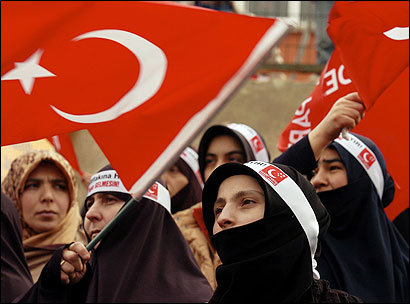 ISTANBUL -- A poster of a pig with the face of Pope Benedict XVI plastered to its head and a cross painted on its pink belly hinted at the fierce reception the pontiff could face in Turkey tomorrow when he kicks off his first papal trip to a Muslim country.

The homemade poster was brandished yesterday by protesters from a small but growing Islamic political party. Yet the harsh placards the party organizers had originally mass-produced -- "Ignorant and sly Pope, don't come" -- were nowhere to be seen. Turkish authorities, who are pushing for membership in the European Union and who place some limits on political speech, had let the party leaders know that the insult went too far.

The rage of the protesters and the caution of the authorities illustrate the deep ambivalence in Turkey over the papal visit. At a time of global anxiety over Muslim-Christian relations, the planned trip has reignited anger over remarks the pope made in September suggesting a relationship between Islam and violence. And perhaps more important for Turks, who are acutely aware of their history as a fulcrum between East and West, it has sharpened divisions within this 99-percent Muslim but officially secular country.

Benedict, 79, is seen as a lightning rod for Turkey's internal disputes. By highlighting questions about the status of Turkey's tiny but historically important Christian minority, his visit has sharpened those dividing lines -- between religious Muslims who want to end restrictions on public observance and secular Muslims who fear imposition of a religious way of life, as well as between Turks who want to tie their fate to Europe's and those who want to distance themselves from the West.

In majority-Muslim countries from Morocco to Indonesia, Benedict's visit will be watched to see if it helps heal -- or exacerbates -- mistrust between Muslims and Christians.

A crowd estimated at more than 20,000 yesterday staged the biggest protest yet against the pope's visit, under the banner of the Islamic Saadet Party, which won 4 percent of the vote in 2004, short of the threshold needed to enter parliament.

Mehmet Yanik, 53, a retired civil servant who traveled 11 hours by bus to the rally from the Aegean coast city of Denizli, wants an Islamic state because, he said, "God should rule the world." The pope is in league with President Bush, he declared, to turn the world into "a sea of blood."

Yet a short drive away, Taksim Square, the pulsing heart of this sparkling city straddling the Bosporus, teems with Turks like Aydin Durmaz, 56.

"There is no need to act as if an enemy is coming to Turkey," the businessman, who described himself as "an identity-card Muslim," said as he headed out Saturday night with his wife for a glass of wine.

"There is no need to act on emotions" about the pope's comments, he said.

His wife, Ayda, 50, said she hoped the visit would "better integrate the Christian and Muslim communities."

The visit took on new significance after the pope's controversial lecture last September at the University of Regensberg in Bavaria.

The pope devoted most of his remarks on the topic of reason and religion to arguing that Europe had drifted too far from its Christian roots. He quoted a 15th-century Christian ruler of what is now Turkey, who wrote that the prophet Mohammed, the founder of Islam, had brought the world nothing but "evil and inhuman" things and spread his religion by the sword.

Muslims around the world protested, in a few cases attacking churches. A nun was killed in Somalia, and a priest was killed in the Turkish Black Sea port of Trabzon in what Turkish authorities said was a revenge killing by a male teenager.

Many Turks, meanwhile, including intellectuals and secular residents, say they suspect the pope's remarks on the eve of his visit might have been timed to sabotage their nation's attempt to join the European Union. Formal accession talks began in October, although doubts remain about whether Europe will agree to absorb a country of 80 million, mostly Muslim and mostly poor.

In 2004, as Cardinal Joseph Ratzinger, the pope argued that Turkey's Muslim identity places it in "permanent contrast" to Christian Europe. Turkish Islamists also object to the union, saying Turkey should ally itself with other Muslim nations.

Many secular Turks therefore suspect that the pope and the Islamists are eager to clash in order to convince the world that Turkey doesn't belong in Europe.

That leaves secular Muslims like Zubeyde Karabulut, 29, feeling caught in the middle, angry at the pope's remarks but disagreeing with the Islamists' goals.

"We have never heard something this radical from any other pope," she said as she strolled with her boyfriend near Taksim Square. "We are not people who are religious or radical. But because of [the pope's speech] we are starting to think in a different way."

The Vatican and the Turkish government have scrambled to figure out how to handle the visit. Prime Minister Recep Tayyip Erdogan, wary of losing the Islamist vote that helped bring him to power, at first snubbed the pope in favor of a meeting outside the country, but has hinted that he will meet him for a few minutes at the airport. Vatican spokesmen said the pope was considering visiting the historic Blue Mosque, his first stop ever to a Muslim place of worship.

Ostensibly, the pope is coming in response to an invitation issued last year by Bartholomew, the ecumenical patriarch of the Orthodox Church, which split with the Catholic Church in 1054. The Orthodox Byzantine Empire ruled Istanbul, then called Constantinople, until the Turks conquered the European side of the Bosporus, the strait that separates Europe and Asia, more than 500 years ago.

Bartholomew plans to ask for the pope's support in winning more freedom for the Orthodox Church to train its priests in Turkey, where religious rights have been restricted since Mustafa Kemal Ataturk founded the modern state in 1923, subordinating Islam and all other religions to Turkish nationalism.

Such a request has raised the hackles of Turkish nationalists who fear the patriarch wants to reassert Byzantine power by creating a Vatican-like state within Turkey. And they fear that if the government revises laws to grant more freedoms to Christians, then the changes would also benefit the Islamists whom secular Turks fear.

Mesrob II, the patriarch of the Armenian Orthodox Church, the largest Turkish Christian community with nearly 100,000 members, said in an interview last week that the pope's lecture damaged the position of Christians in Turkey.

"Why did he have to mention Muslims?" he said.