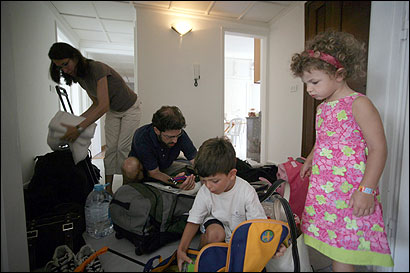 Many are trapped amid Israeli siege

BEIRUT -- After days of bombardment and blockade by Israel, many Lebanese and visitors faced a tough choice: to leave through the last remaining exit routes or hunker down with extra candles, water, and powdered milk.

Tens of thousands have fled this tiny country since Thursday, after Israel began bombing targets in southern Lebanon and parts of Beirut in retaliation for the kidnapping of two Israeli soldiers by Hezbollah. But most of Lebanon's 4 million residents remain, unfazed by the familiar sounds of war around them.

Israeli officials said they feared that Hezbollah, a popular political party here that is considered a terrorist group in the United States, would transport the soldiers out of the country, so they laid siege to Lebanon, closing its ports and bombing the only airport and major highways to the outside world.

The blockade trapped many of the estimated 25,000 visiting Americans, among them Melani Cammett , a Harvard-affiliated professor living in the Back Bay, her husband, and their two children, ages 3 and 5.

``We're just stuck basically," she said in a telephone interview as she and her husband weighed their options. They had not heard from the US embassy in two days. ``There is very limited information about how to get out."

Cammett, who had come to Lebanon to research Hezbollah, initially thought of staying through the end of July as planned, since her upscale West Beirut neighborhood had not been targeted. But after two nights of being woken up by the sound of Israeli jets, they decided to leave. The only question was how.

Catching a boat to Cyprus was out of the question, she said, because of Israel's naval blockade. Driving out east on the highway to Damascus was not possible either, friends told her, because that, too, had been bombed.

Finally, she heard that there was a smaller road running north to Homs, Syria.

Although Cammett wasn't sure if they would have problems getting a visa to enter Syria, her landlord helped her organize a $600 taxi to take her and her family on the 12 hour drive north, perhaps to the Syrian city of Aleppo or to Damascus.

``We have no idea what city we'll end up in," Cammett said, adding that she had been told to expect bumper-to-bumper traffic and long lines at the border. ``We're not even certain this trip can happen because apparently there is some chance that Israel will bomb the northern road."

Indeed, around the time Cammett's convoy was due to leave Beirut news outlets reported that Israel had bombed the Homs road. No one was injured, but it was unclear how badly the road had been damaged. Cammett could not be reached last night, and it couldn't be determined if she and her family had been able to leave the country.

Thousands of other American families, both tourists and Americans of Lebanese descent, are still trying to get out. The Arab American Institute, a Washington-based advocacy group, has collected more than 100 names of Americans who want to be evacuated, including Akeel Saad , a 71-year-old US citizen from Michigan who was visiting his family in Lebanon. Saad is now hospitalized in critical condition after his family home in Bint Jbeil, a village near the Israeli border, was struck, according to his cousin Samar Saad , who spoke in a telephone interview from Dearborn, Mich. She said Saad's son, a Lebanese citizen, was killed in the attack.

``The situation is getting worse by every hour," said Samar Saad. Thousands of families from Bint Jbeil settled in Dearborn over the past two decades, she said. ``There are hundreds of people from Dearborn, US citizens, who are stuck there."

Yesterday, the State Department announced that they were working with the Department of Defense on an evacuation plan that would involve transporting American citizens to the nearby island of Cyprus where they could board commercial aircraft. The message warned that citizens would have to pay the cost of their own evacuation.

CNN reported that the US military was considering setting up an ``air bridge" between Beirut and Cyprus that would ferry people in helicopters or planes in quick succession. But a State Department spokesman said yesterday that she had no time line for the evacuation, and no information about whether Americans trapped near the Israeli border would be forced to travel on dangerous roads to Beirut in order to be carried out.

Not everyone in Lebanon is clamoring to leave.

Yesterday morning, as Cammett and her family waited with their packed bags for the taxi convoy, the family of her Lebanese landlord next door was preparing to stick it out.

``Where would we go? Who would take care of us?" asked Nahed Kalash , a 35-year-old English teacher. ``You need a lot of money to live in a hotel, even for a few days."

Their family, which has stocked up on water, cash, gasoline, and prescription medication, has been through tough times before. They moved into the building in 1982, the year that Israel made its last massive incursion into Lebanon.

``I think it's going to be worse this time," said Kalash. ``We are very afraid. The Israelis are attacking civilians and bridges and roads -- things that have nothing to do with the military."

For many of those who lived through Lebanon's civil war, from 1975 to 1990, the first days of this week's Israeli bombardment were a mere aggravation.

Late Wednesday night, as Israeli warplanes bombed the highways, hundreds of Lebanese flocked to the opening of Sky Bar, a trendy rooftop nightclub on the seafront.

On Thursday, bars were still full of patrons, some of whom felt that continuing on with normal life was a small act of defiance against Israel's attacks.

But by Friday, after three straight nights of a widening military campaign, the conflict began to leave its mark on ordinary life. Downtown Beirut emptied. Families huddled around their television sets, looking for news. Supermarkets ran short of candles, bread, flashlights, and powdered milk.

``We thought that it was going to last a day or two, max. Now we fear it is going to last longer," Charles Adwan , a 30-year-old political researcher who grew up in Lebanon during the civil war, said Friday night in a telephone interview. ``Tonight, people are home. No one is going out. They are preparing for the worst."

Life has changed in small ways for those outside the targeted neighborhoods, Adwan said. No one can sleep anymore in his neighborhood of Chiah, because it is less than a mile way from the southern suburb of Beirut where bombs are dropping almost hourly on Hezbollah headquarters.

When Adwan went to buy a reserve supply of escargot, his favorite food, he found it costs a dollar more now. When Adwan asked the seller why, ``He said, `I almost died getting it from the south,' " Adwan recalled.

Weddings have been canceled, along with international conferences.

``It is really the social blockade that is bothering people the most," Adwan said.

At the height of economically critical tourist season, a major national festival has been postponed indefinitely, along with five sold-out shows by one of Lebanon's most beloved singer, Fairouz . The festival -- and the huge number of tourists who had come for it -- symbolized Lebanon's new unity and prosperity, a year after a popular uprising forced Syria to withdraw its troops.

In the Chatila refugee camp, where Israeli-backed Christian militias massacred hundreds of civilians in 1982, 38-year-old Yusef Fayad expressed despair at the new explosion of violence.

``We want peace and life and love together," said Fayad, who lost an eye during the 1982 attack. Now he is unemployed, and his children make money by scavenging copper wire from trash heaps.

He had hoped for a better life, he said, ``But always the killing, always the guns."