US slammed over casino attack 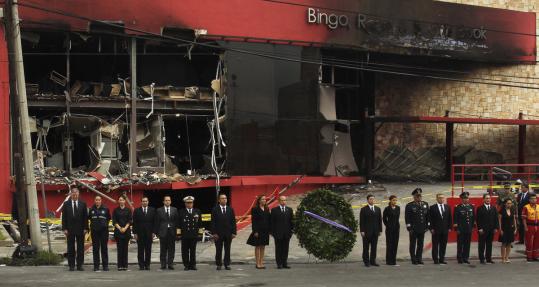 MEXICO CITY - President Felipe Calderon yesterday charged that the US government, along with American drug consumers and gun dealers, was partly responsible for the deaths of 52 people killed in an arson attack at a casino in Monterrey.

Wearing a black suit and tie as he addressed a rattled nation, Calderon blamed his northern neighbor for the devastating attack, arguing that assault-style weapons and billions of dollars in drug profits empower the criminal organizations that he said were probably behind Thursday’s firebombing of the Casino Royale.

“The economic power and firepower of the criminal organizations operating in Mexico and Latin America come from this endless demand for drugs in the United States,’’ Calderon said. “We are neighbors, we are allies, we are friends, but also, you are responsible. That is my message.’’

In a short statement, President Obama condemned “the barbaric and reprehensible attack’’ and vowed to remain a partner in the fight against violent transnational criminal organizations.

Neither Calderon nor the Obama administration provided evidence that the assailants were part of a major drug trafficking organization. The attackers remained at large and their identities and affiliations unknown.

But critics in Mexico were raising questions about the unregulated proliferation of casinos and the failure of the Calderon government and Monterrey officials to adequately monitor these businesses or inspect their buildings to make sure they are not hazardous fire traps.

Sports betting, nightclubs, casinos, and cantinas - businesses that deal in a lot of cash - are often used by criminal gangs to launder money. They are also frequently targeted by extortionists.

A security camera captured images Thursday afternoon of a dozen assailants pulling up in four vehicles to the front doors of the Casino Royale and entering the entertainment complex, which offers bingo and betting on sports and horse racing.

As patrons ran away from the building, some of the gunmen stood by their cars and watched. Other assailants rushed into the casino, pointing guns. They did not appear to be wearing masks. Three of the cars were found yesterday, all reported stolen.

Within two minutes and 30 seconds of the gunmen’s arrival, black smoke and red flames appeared in the security video, and the gunmen were shown driving away. Security analysts said the speed of the attack indicated that the motive was to burn the business down.

The governor of the state of Nuevo Leon in northern Mexico, Rodrigo Medina, said at a news conference that the fire was ignited by “a group of people linked to organized crime,’’ but he did not specify which group or whether there were links to drug trafficking organizations.