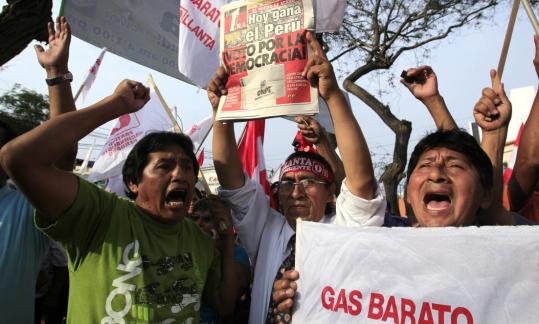 LIMA — An antiestablishment military man who promises to redistribute Peru’s wealth won the most votes in yesterday’s presidential election and will face the daughter of imprisoned former president Alberto Fujimori in a runoff, unofficial results showed.

Keiko Fujimori, 35, could end up beating Ollanta Humala in the June 5 runoff, because Humala was the only candidate who advocated altering Peru’s free-market-oriented status quo by giving the state a greater role in the economy.

The ex-army lieutenant colonel also won the first round in Peru’s 2006 presidential vote but was defeated, 53 percent to 47 percent, by Alan Garcia in a runoff widely seen as a rebuff to Hugo Chavez, who had openly backed him.

This time, Humala distanced himself from the leftist Venezuelan president, and Fujimori backed away from the vows to pardon her father, which she made two years ago when he was convicted of approving death squad killings and sentenced to 25 years in prison.

In fourth was Alejandro Toledo, Peru’s president from 2001-2006, with 15.9 percent. Former Lima Mayor Luis Castaneda was fifth with 9.9 percent.