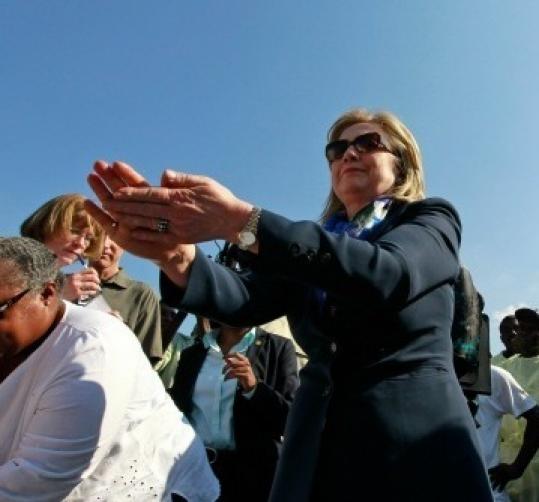 PORT-AU-PRINCE, Haiti — The United States has no plans to halt aid to earthquake-ravaged Haiti in spite of a crisis over who will be the nation’s next leader but does insist that the president’s chosen successor be dropped from the race, Secretary of State Hillary Rodham Clinton said yesterday.

Clinton arrived yesterday in the impoverished Caribbean nation for a brief visit. She is scheduled to meet with President Rene Preval and the three candidates jockeying to replace him.

Only two candidates can go on to the delayed second round, scheduled for March 20. The United States is backing an Organization of American States recommendation that the candidate from Preval’s party, government construction official Jude Celestin, should be left out. International monitors determined that Celestin finished last in a fraud-ridden first round.

Final results of the first-round election are expected to be announced Wednesday.

The top US official at the United Nations, Susan Rice, said recently that “sustained support’’ from the United States required that the OAS recommendations be implemented.

Many Haitian officials interpreted that to mean the United States was threatening an embargo and cutting off aid. “We’re not talking about any of that,’’ Clinton said yesterday.