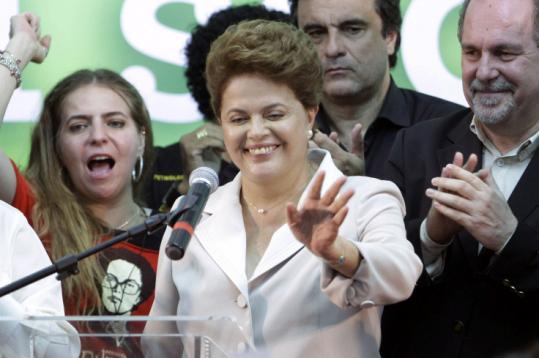 SAO PAULO — A former Marxist guerrilla who was imprisoned and tortured during Brazil’s long dictatorship was elected yesterday as president of Latin America’s biggest nation, a country in the midst of an economic and political rise.

With 99 percent of the vote counted, ruling-party candidate Dilma Rousseff had 56 percent, compared with 44 percent for her centrist rival, Jose Serra, according to the Supreme Electoral Court.

The new president will lead a nation on the rise, a country that will host the 2014 World Cup and that is expected to be the globe’s fifth-largest economy by the time it hosts the 2016 Summer Olympics. It has also recently discovered massive oil reserves off its coast.

Both Rousseff and Serra are economists by training.

“Starting tomorrow, we begin a new stage of democracy,’’ Rousseff, 62, said in the southern city of Porto Alegre, where she cast her vote. “I will rule for everyone, speak with all Brazilians, without exception.’’

After he voted in Sao Paulo, Serra told reporters that after eight years of rule by Silva and his Workers Party, it was time for change.

Silva used his 80 percent approval ratings to campaign incessantly for Rousseff, his former chief of staff and political protege. She has never held elected office and lacks the charisma that transformed Silva from a one-time shoeshine boy into one of the globe’s most popular leaders.

Silva has served two four-year terms and is barred by the constitution from running for a third. He has batted down chatter in Brazil’s press that he is setting himself up for a new run at the presidency in 2014, which would be legal.

That does not mean many voters don’t want “Lula,’’ as he is popularly known, to stay.

“If Lula ran for president 10 times, I would vote for him 10 times,’’ said Marisa Santos, 43, selling her homemade jewelry on a Sao Paulo street. “I’m voting for Dilma, of course, but the truth is it will still be Lula who will lead us.’’

Silva entered office with a background as a lefist labor leader, but he governed from a moderate perspective. Under his leadership, the economy grew strongly, and Brazil weathered the global financial crisis better than most nations.

He is loved within Brazil by the legions of poor, who consider the nation’s first working-class president one of their own. His social programs and orthodox economic policies have helped lift 20 million people out of poverty and thrust another 29 million into the middle class.

Serra, 68, is a former governor of Sao Paulo state and one-time health minister who was badly beaten by Silva in the 2002 presidential election.

Rousseff was a key player in an armed militant group that resisted the 1964-1985 military dictatorship and was imprisoned and tortured for it. She is a cancer survivor and an ex-minister of energy and Silva’s chief of staff.

Serra also battled the dictatorship, but through politics rather than armed resistance. He headed a national student group that opposed the regime and was forced into exile in Chile in 1965 before heading to the United States, where he earned a doctorate in economics at Cornell.