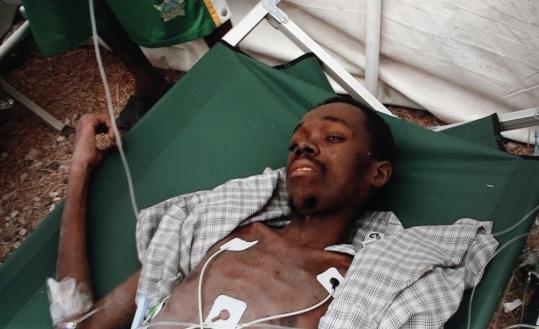 Evans Monsigrace told health care workers that he was selling rice in a flea market when the quake destroyed the building, trapping him under debris, apparently along with water or food. (Michael Kastenbaum/Reuters)
By Michelle Faul Associated Press / February 11, 2010

TITANYEN, Haiti - Haiti issued wildly conflicting death tolls for the Jan. 12 earthquake yesterday, adding to the confusion about how many people died - and to suspicion that nobody really knows.

A day after Marie-Laurence Jocelyn Lassegue, communications minister, raised the official death toll to 230,000, her office put out a statement quoting President Rene Preval as saying the government had hastily buried 270,000 bodies following the earthquake.

A press officer withdrew the statement, saying there was an error, but reissued it within minutes. Later yesterday, the ministry said that because of a typo, the number should have read 170,000.

Even that didn’t clear things up. In the late afternoon, Preval and Lassegue appeared together at the government’s temporary headquarters.

Preval, speaking English, told journalists that the toll was 170,000, apparently referring to the number of bodies contained in mass graves.

Lassegue interrupted him in French, offering a number lower than she had given the previous day: “No, no, the official number is 210,000.’’

“Oh, she doesn’t know what she’s talking about,’’ he said, again in English.

There is no doubt that the death toll - whatever it is - is one of the highest in a modern disaster.

A third of Haiti’s 9 million people were crowded into the chaotic capital when the quake struck just to the southwest a few minutes before 5 p.m. Many were preparing to leave their offices or schools. Some 250,000 houses and 30,000 commercial buildings collapsed, many crushing people inside, according to government estimates.

For days, people piled bodies by the side of the road or left them half-buried under the rubble. Countless more remain under collapsed buildings.

No foreign government or independent agency has issued its own death toll. Many agencies that usually help estimate casualty numbers say they are too busy assisting the living to keep track of the dead. And the Joint Task Force in charge of the relief effort - foreign governments and militaries, UN agencies, and Haitian government officials - quotes only the government death toll.

It’s common in major disasters to see large discrepancies in death tolls: Governments may use lower figures to save face or higher figures to attract foreign aid. In Haiti’s case, however, where the very institutions responsible for compiling information were themselves devastated, reaching a death toll is particularly difficult.

Even some officials express skepticism that the government is keeping count.

Meanwhile, a rice vendor who doctors say may have survived 27 days under the rubble after Haiti’s devastating earthquake was in stable condition and eating yesterday.

Doctors were skeptical at first about the man’s story - people can survive as long as nine weeks without food, but die quickly without water. The last confirmed survivor was a 16-year-old girl removed from rubble 15 days after the Jan. 12 quake.

They turned into believers, however, after he became lucid enough to tell his tale. He told health care workers that he was selling rice in a flea market when the quake destroyed the building, trapping him under the debris - apparently along with water or food.

“He’s doing very well,’’ said Dr. David Chong, who was treating the man at a University of Miami Medishare field hospital in Haiti’s capital. “We’ve been giving him intravenous fluids and he’s tolerating them well. We also gave him a Hershey bar. He was pretty happy about that.’’

The man - identified as 28-year-old Evans Monsigrace - had bad scrapes on his feet after being pulled from the rubble. He told doctors he was on his side for much of the time, trapped in a small void in the remains of the market.

“He’s not going to be able to walk for a while, but he should have a full recovery,’’ Chong said.