Much rests on Haiti elite

Stung by losses, the wealthy consider fleeing or rebuilding 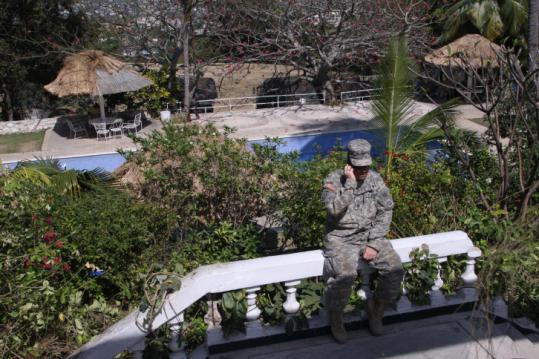 The US Army’s 82d Airborne Division was allowed to set up relief efforts at the Petionville Club in Haiti. (Bill Greene/Globe Staff)
By Maria Sacchetti Globe Staff / January 31, 2010

PETIONVILLE, Haiti - Days after the powerful earthquake, the wide-screen TVs still flashed inside the exclusive walled estates high on a verdant hill in this suburb. Servants poured espresso into fine china, delivered glasses of water on silver trays, and tapped cupboards filled with enough vegetables and pasta to last for weeks.

The eerie calm contrasted sharply with the devastation a few miles below in Port-au-Prince, a hot, dusty swath of collapsed buildings where hundreds of people scoured the rubble for food or gulped water from busted pipes.

Though the 7.0-magnitude quake left the rich and the poor mourning the dead, the cavernous gap in incomes in Haiti is even more pronounced in the aftermath. In the frantic days after the Jan. 12 quake, the wealthy spirited their loved ones overseas in private planes, sought refuge in armed compounds powered by generators, and even ordered pizza and surfed the Internet.

“In every country there are differences, but here in Haiti it’s much more apparent,’’ Frantz Allen said as he composed e-mails to relatives on a laptop at Muncheez, a popular pizzeria in Petionville. “I’m 41 and since I was a little boy I’ve seen it like that. . . . I don’t know. It just happened.’’

The question now is whether the wealthy elite that controls the bulk of the economy will help rebuild Haiti and create a thriving middle class. Eighty percent of Haitians live in poverty, while a handful of often light-skinned descendants of the French, who ruled the country’s coffee and sugar slave plantations until Haiti declared independence in 1804, and other groups control most of the wealth.

The yawning gap has come at a cost for all groups. Many wealthy are prisoners in their own homes, traveling with armed guards and living in constant fear of kidnappings for ransom. Meanwhile, impoverished Haitians subsist in tin-roofed huts, with vast unemployment and, according to the World Bank, one of the lowest life expectancies - age 60 - in the Western Hemisphere.

Only 56 percent of adults can read and write, according to the State Department. Public education is technically free, but parents have to pay for uniforms and supplies, making it unaffordable. Ninety percent of primary schools are privately run. Barely 20 percent of secondary school-age children attend school.

The walled estates in the high hills above downtown Petionville reflect the divide. Petionville sustained collapsed buildings and numerous deaths, and had residents sleeping on the street. But looting was not apparent and the destruction was far less pronounced than in the capital. In the quiet hills above the city, destruction was even less widespread, perhaps because of the location or better-built housing.

Near the top of one hill, the owners of a lemon-colored villa had a stockpile of fresh water and tomato sauce, plus three generators. The family’s servants said the residents had decamped to the United States almost immediately after the earthquake.

A few streets away, Abraham Farrah, a 72-year-old businessman, hunkered down in his white-walled compound, guarded by armed men. Framed art hung on the walls, news blared on the television, and a servant brought cups of coffee on a tray. The self-made businessman, who followed his father from Syria to Haiti when he was 18, said both of his supermarkets in Port-au-Prince collapsed in the quake.

“I lost everything ,’’said Farrah, a gentle, white-haired man who wore a T-shirt emblazoned with a picture of his grandson. “I worked for 50 years and in one second I lost everything.’’

When the earthquake hit, Farrah thought it was a bomb - a response that reflects his life in Haiti.

Two years ago, he said, bandits put a gun to his head as he drove to work and held him hostage for hours until his son paid a ransom. Years ago, he would take his family to the beach, but now he stays inside watching TV or playing cards, and only leaves his home to go to work, escorted by armed guards.

He said he misses the Duvaliers, the father and son who ruled Haiti for 29 years in brutal dictatorships. For him, though, life was safer.

“Under Duvalier we had security,’’ he said. “You could go out at anytime and come back anytime you wanted.’’

Even the Caribbean Supermarket on a busy street in Petionville was a fortress; the parking lot was hidden behind soaring concrete walls topped with barbed wire, and protected by armed guards from a bulletproof tower. The four-story building collapsed in the earthquake.

Now the wealthy are mulling whether to rebuild. Farrah was unsure. He said his son opened a factory in the neighboring Dominican Republic because of Haiti’s instability.

But Gilbert Bailly, a 42-year-old owner of the Muncheez pizzerias, said the government should make it easier for the well-off to invest, instead of criticizing them for their wealth.

“We’ve been carrying all the blame all our lives because they’ve been using us as bait for them to get in power,’’ said Bailly, who is sleeping in his car because his house collapsed and his son is afraid to sleep indoors. They say “ ‘Hate the light-skinned ones. They don’t want you to get an education.’ We give them jobs. We pay the government to give them jobs.’’

Since the earthquake, some say, promising signs of cooperation between the rich and the poor have emerged.

Muncheez gave out food every afternoon for more than a week to the poor. The Caribbean Supermarket gave salvaged boxes of food to the needy to prevent them from combing through the ruins.

“It’s my country. I have to help,’’ said Misha Bennett, an owner of the supermarket, whose father is presumed dead in the earthquake. “The more people you help, the better it is.’’

The Petionville Club allowed the US Army’s 82d Airborne Division to set up relief efforts, dominating everything from the golf course to the tennis courts. But the country club president, who is white, spoke sharply to some waiters, according to a translator. The staff gathered at the front door daily, hoping to go back to work, and said the club president did not respond to them.

Across the courtyard at the club, Nelly Boyer and her husband, Jean Claude, said they hoped the reconstruction would take Haiti in a different direction.

“We have to erase the blackboard and we have to start all over again with compassion, love, and to help each other,’’ said Boyer, a business professor at Quisqueya University, who was there to volunteer for the 82d Airborne.

Her husband, a physical education teacher at a private school, nodded.

“We have to change our mentality,’’ he said. “But I don’t know if that will happen.’’