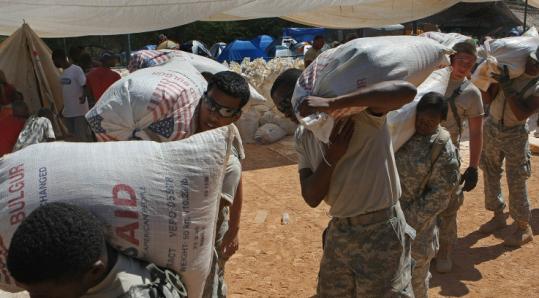 PORT-AU-PRINCE, Haiti - She is amazing her doctors, the 16-year-old choir girl who came close to dying but wouldn’t in the crumbled concrete graveyard of Port-au-Prince.

More than two weeks after the earthquake brought down her school - and a day after she was lifted from the ruins - Darlene Etienne was eating yogurt, talking, and regaining her strength yesterday.

“We are very surprised at the fact that she is still alive,’’ said Dr. Evelyne Lambert, who is caring for her on a French hospital ship offshore.

One who didn’t seem surprised was the girl’s mother, a poor rice and vegetable peddler.

Added Darlene’s younger brother, Preslin, “I think she has a special God.’’

The astonishing rescue of the high school student, by a French search team that refused to go home when others did, offered a moment of joy in this grieving city, where uncounted thousands were entombed in a landscape of broken and heaped-up concrete, wood, and metal.

They’re among an estimated 200,000 quake dead in Haiti, including 150,000 who Haitian officials say have been buried anonymously in mass graves.

The US Army’s bulldozers were digging into that rubble yesterday, knocking down shaky walls and beginning to clear away ruins in Port-au-Prince, where perhaps 90 percent of the buildings were destroyed or damaged in the Jan. 12 quake.

Among the tens of thousands of survivors, desperation has grown as a huge global relief effort has run into bottlenecks in air, sea, and road transport, with looting and other security problems disrupting mass food handouts.

The UN World Food Program says it has delivered more than 4 million rations, equivalent to roughly 13 million meals, to some 500,000 people. But it projects that 2 million Haitians need food aid - now and until December.

The International Organization for Migration, responsible for internally displaced people worldwide, had only 10,000 tents in Haiti before the quake and is urgently trying to bring in more.

Darlene Etienne was pulled from the rubble of her cousin’s off-campus house Wednesday near the ruins of the St. Gerard school. She was rushed to a French field hospital and then to a hospital ship.

“At the very beginning, she was in very poor condition, but now she has been stabilized,’’ Lambert said.

Darlene was drinking water and had eaten yogurt and mashed vegetables, Lambert said. She put her chance of survival at 90 percent.