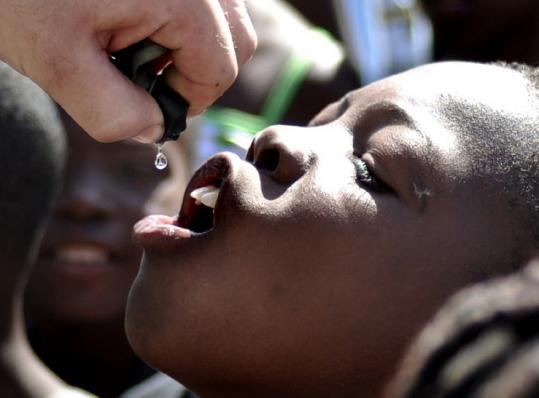 A paratrooper from the US 82d Airborne gave water to a girl in Cite Soleil, a section of Port-au-Prince. The Americans also distributed ready-to-eat meals and high-energy biscuits. (Fred Dufour/ AFP/ Getty Images)
By Vivian Sequera and Mike Melia Associated Press / January 25, 2010

PORT-AU-PRINCE, Haiti - After the government declared an end to the search for survivors, a global aid worker said yesterday that they were getting more food and water into people’s hands but still falling short.

“We wish we could do more, quicker,’’ said Josette Sheeran, UN World Food Program chief, who was visiting Port-au-Prince. While aid deliveries have increased since the initial logjams, the need continues to be overwhelming, and doctors fear outbreaks of disease in refugee camps, officials said.

In the Cite Soleil slum, US soldiers and Brazilian UN peacekeeping troops distributed food. Lunie Marcelin, 57, said the donations will help her and her six grown children, “but it is not enough. We need more.’’

Crews filling Haiti’s mass graves with bodies reported ever higher numbers over the weekend: More than 150,000 quake victims from the metropolitan area of Port-au-Prince have been buried by the government, officials said. That doesn’t count those still under the debris, carried off by relatives, or killed in the outlying quake zone.

Yet another aftershock, one of more than 50 since the great quake Jan. 12, shook Port-au-Prince yesterday, registering 4.7 in magnitude, the US Geological Survey said. There were no immediate reports of further damage.

The Haitian government urged many of the estimated 600,000 homeless huddled in open areas of Port-au-Prince, a city of 2 million, to look for better shelter with relatives or others in the countryside. Some 200,000 were believed already to have done so, most taking advantage of free government transportation. Others formed a steady stream out of the city yesterday.

With rescues now increasingly unlikely, the government has declared an end to such operations, shifting the focus to caring for the thousands in squalid, makeshift camps.

International aid workers searched for sites to erect tent cities for quake refugees on the capital’s outskirts, but such short-term solutions were still weeks away, said the International Organization for Migration, an intergovernmental agency.

“We also need tents. There is a shortage of tents,’’ said Vincent Houver, the Geneva-based agency’s chief of mission in Haiti. Their Port-au-Prince warehouse has 10,000 family-size tents, but some 100,000 are needed, he said. The organization has appealed for $30 million for that and other needs, and has received two-thirds of that so far.

In the aftermath of the 7.0-magnitude earthquake, the casualty estimates have been tentative.

The final casualty estimates, which the European Commission said also include some 250,000 injured, will clearly place the Haiti earthquake among the deadliest natural catastrophes of recent times. That list includes the 1970 Bangladesh cyclone, believed to have killed 300,000 people; the 1974 northeast China earthquake, which killed at least 242,000 people; and the 2004 Indian Ocean tsunami, with 226,000 dead.

The World Food Program delivered about 2 million meals Friday, up from 1.2 million Thursday, Sheeran said. But she acknowledged that much more was needed. “This is the most complex operation WFP has ever launched,’’ she said.

The scene yesterday at Cite Soleil, the capital’s largest and most notorious slum, showed the need.

Thousands of men, women, and children lined up and waited peacefully for their turn as American and Brazilian troops handed out aid. The Americans gave ready-to-eat meals, high-energy biscuits, and bottled water, while the Brazilians passed out water and small bags holding uncooked beans, salt, sugar, and sardines.

The need for medical care, especially surgery, postoperative care, and drugs, still overwhelmed the help available, aid agencies reported. In the isolated southern port city of Jacmel alone, about 100 patients needed surgery as of Friday, the UN reported. Medical personnel were there, but not the necessary surgery supplies.

In Port-au-Prince, meanwhile, the aid group Doctors Without Borders said its inflatable hospital - six large tents flown in from France - was preparing for its first operations.

At the Choscal hospital in Cite Soleil, the operating room has been busy with obstetric cases and some machete and gunshot wounds, Doctors Without Borders said, as looting and violence sputtered on among the ruins. The numbers of young men scavenging for goods seemed lower, however, because most shops were already cleaned out.

The world’s nations have pledged some $1 billion in emergency aid to Haiti. Organizers of Friday night’s “Hope for Haiti Now’’ international telethon reported that the event raised $57 million, with more pledges still coming in.

The staff of a Port-au-Prince nursing home that crumbled in the earthquake gave the last of its food to the elderly patients yesterday, and caregivers said they didn’t know when or how the next meal would come.

“Now the food is finished,’’ cook Jeannine Laurore said as she scraped the last of the mashed corn into a patient’s metal dish.

The quake that devastated the capital also halted the home’s food donations from the community. Medical assistance has trickled, but caregivers are still waiting for aid groups to deliver on food pledges.