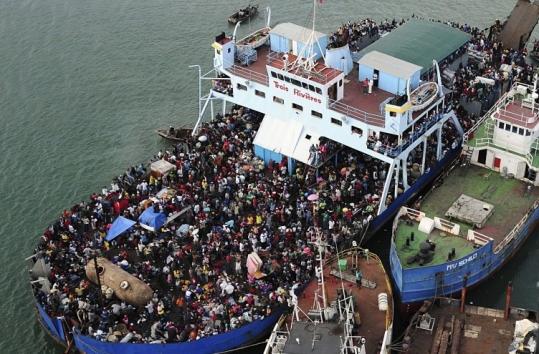 WASHINGTON - As a massive international relief effort lurches into gear, US officials are stepping up measures to prevent last week’s earthquake in Haiti from triggering a Caribbean mass migration not seen in two nearly two decades.

Federal officials said most Haitians who try to escape by sea would be sent back if they are caught.

South Florida counties have readied contingency plans and immigration authorities have cleared space in a 600-bed immigrant detention center in Miami. Some refugees could also be housed temporarily at the Navy base at Guantanamo Bay, Cuba.

There are no signs yet of a seaborne exodus, but history shows that such events are difficult to predict, officials said.

“Please, if any Haitians are watching, there may be an impulse to leave the island and to come here,’’ Janet Napolitano, Homeland Security secretary, said Saturday. “This is a very dangerous crossing. Lives are lost every time people try to make this crossing.’’

Napolitano addressed Haitians directly as she joined Vice President Joe Biden in speaking to relief workers at a federal staging area at Homestead Air Reserve Base in Florida. “Please do not have us divert our necessary rescue and relief efforts that are going into Haiti by trying to leave at this point,’’ Napolitano said.

The warnings come paired with a giant humanitarian operation to rebuild Port-au-Prince, position US military assets in the area, and adjust US and international immigration policies.

In the long run, such measures would be the most effective tools to prevent a refugee crisis, current and former government officials said.

With hundreds of thousands of people affected by Tuesday’s quake, the stakes for the Obama administration in heading off a wave of migrants are high.

“We don’t want to have destabilization in Haiti, and deaths of this magnitude in Haiti cause destabilization and have political implications,’’ said Andrew Natsios, a veteran foreign aid official who led US relief efforts in Iraq, Afghanistan, Sudan and the Asian tsunami in 2004. “You cannot prohibit people from moving under international law if they feel threatened. But you can create incentives to stay,’’ said Natsios, head of US Agency for International Development from 2001 to 2006. “If you do the relief response right, most people will want to rebuild.’’

American presidents since Jimmy Carter have grappled with flows of migrants from the Caribbean triggered by political crises, wars, and natural disasters.

After a coup in Haiti in 1991, the US government housed 12,000 Haitian migrants in Guantanamo Bay and admitted 10,000 before a new government was in place in 1994, a year in which the US Coast Guard stopped and rescued 64,000 Haitians and Cubans at sea.

Spurred by reports that Cuban leader Fidel Castro was in failing health in 2006, the US government embarked on an intensive contingency plan, called Operation Vigilant Sentry, signed by Michael Chertoff, then homeland security secretary, in 2007.

“The best thing we can do is spend as much relief aid as possible in Haiti,’’ Natsios said.