THIS STORY HAS BEEN FORMATTED FOR EASY PRINTING
Relief efforts 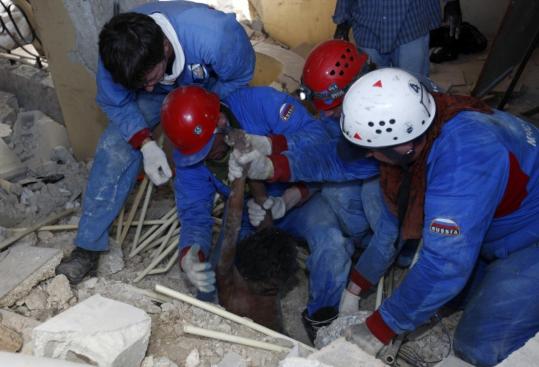 PORT-AU-PRINCE, Haiti - As the focus yesterday began turning away from Haitians lost to those who were spared, a sprawling assembly of international officials and aid workers struggled to fix a troubled relief effort after Tuesday’s devastating earthquake.

While countries and relief agencies have showered aid on Haiti, little of it is reaching increasingly desperate Haitians who lack food, clean water, or shelter. And there were reports of intensifying looting and violence, particularly around aid distribution points.

The worst violence to date broke out in a warehouse district in central Port-au-Prince, where at least 1,000 rioters with makeshift weapons fought over whatever goods they could loot from shuttered houses and shops. Witnesses said the police left as things got worse.

Fred Lavaud, who works on President Rene Preval’s security detail, described scenes of women who had received food being assaulted. “The problem is there’s no control,’’ he said. “And people are desperate.’’

The problems, aid officials say, stem in part from the best of intentions. Countries around the world have responded to Haiti’s call for help as never before. And they are flooding the country with supplies and relief workers that its collapsed infrastructure and nonfunctioning government are in no position to handle.

Haitian officials instead are relying on the United States and the United Nations, but coordination is posing a critical challenge, aid workers said. An airport hobbled by only one runway, a ruined port whose main pier splintered into the ocean, roads blocked by rubble, widespread fuel shortages, and a lack of drivers to move the aid into the city are compounding the problems.

Across Port-au-Prince, hunger and thirst were on the rise. “We see all the commotion, but we still have nothing to drink,’’ said Joel Querette, 23, a college student camped out in a park.

About 1,700 people camped on the grass in front of the prime minister’s office compound in the Petionville neighborhood, pleading for biscuits and water-purification tablets distributed by aid groups.

Haitian officials said tens of thousands of victims had already been buried. A Red Cross estimate put the total number of affected people at 3.5 million. President Obama said yesterday that former presidents George W. Bush and Bill Clinton would lead a national drive to raise money to help the survivors.

“Presidents Bush and Clinton will help the American people to do their part, because responding to disaster is the work of all of us,’’ he said.

Yesterday afternoon, Secretary of State Hillary Rodham Clinton arrived here on a military cargo jet, and was scheduled to meet Preval in the afternoon to discuss continuing relief efforts. Her plane was bringing in more aid, including food and water.

Even as the United States took a leading role in aid efforts, some aid officials were describing misplaced priorities, accusing US officials of focusing their efforts on getting their people and troops installed and lifting their citizens out. The United States is managing air traffic control at the airport, helicopters are flying relief missions from warships off the coast, and 9,000 to 10,000 troops are expected to arrive by tomorrow to help with the relief effort.

The World Food Program finally was able to land flights of food, medicine, and water yesterday, after failing Thursday and Friday, an official with the agency said. Those flights had been diverted so that the United States could land troops and equipment, and lift Americans and other foreigners to safety.

“There are 200 flights going in and out every day, which is an incredible amount for a country like Haiti,’’ said Jarry Emmanuel, the air logistics officer for the agency’s Haiti effort. “But most of those flights are for the United States military.’’

He added: “Their priorities are to secure the country. Ours are to feed. We have got to get those priorities in sync.’’

US officials said they were making substantial progress. Clinton said the military was beginning to use a container port in Cap Haitien, which should increase the flow of aid.

The US Agency for International Development was helping choose sites and clear roads for 14 centers for the distribution of food and water. Rajiv Shah, the agency’s administrator, said the United States had moved $48 million of food supplies from Texas since the quake and distributed 600,000 packaged meals. It also installed three water-purification systems capable of purifying 100,000 liters a day.

Yet problems remain. American officials said that 180 tons of relief supplies had been delivered to the airport, but much was still waiting for delivery. While the military has cleared other landing sites for helicopters around the capital, they are thronged by people looking for help, making landings hazardous.

Fuel shortages were mounting. At several gas stations around Port-au-Prince, attendants or customers said that even though the stations had fuel left in their tanks, there was no electricity to work the pumps.

Some aid workers were critical of the United Nations, as well, arguing that the agency had the most on-the-ground experience in Haiti and should be directing efforts better.

But many UN employees were killed in the earthquake. Yesterday, the body of Haiti mission chief Hedi Annabi was found in the rubble of its headquarters in Port-au-Prince.

Stephanie Bunker, spokeswoman for the UN humanitarian relief effort, said a UN logistics team was trying to coordinate with other agencies, and that the peacekeeping forces were trying to clear roads.

Criticism of the United Nations “may reflect people’s frustrations with the entire effort because it is such a grueling effort,’’ she said. “It takes a long time for all this stuff to be cleared up and fixed.’’ She noted that all modes of transportation - air, road, and sea - were still limited. A crippling shortage of trucks remained a problem.

Michel Chancy, appointed by Preval to coordinate relief, said that much of the aid flowing into Haiti was flooding in to a government that was itself under siege.

“The palace fell,’’ he said. “Ministries fell. And not only that, the homes of many ministers fell. The police were not coming to work. Relief agencies collapsed. The UN collapsed. It was hard to get ourselves in a place where we could help others.’’

At the US Embassy in Port-au-Prince, US rescue teams continued to roll out of the gate. Most of their equipment had arrived, and at any given time, the teams were working on several different piles of rubble throughout the city.

“People need to get the message, we’re out, we’re doing stuff,’’ said Craig Luecke, a coordinator with the search and rescue team from Fairfax County, Va.

Though the numbers are fluid, he said four US teams had helped pulled nearly two dozen survivors from the rubble.

Preval, speaking at the airport, which has become the effective seat of the Haitian government, urged patience.

Preval said he was making food, water, medical supplies, and the reestablishment of communication the priorities for his government. “We have a lot of work to do,’’ he said.