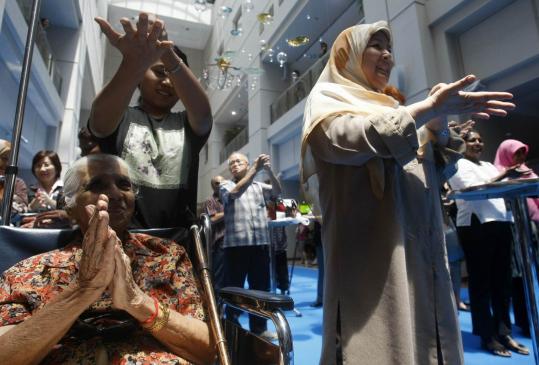 MEXICO CITY - The swine flu epidemic entered a dangerous new phase yesterday as the death toll climbed in Mexico and the number of suspected cases there and in the United States nearly doubled.

The World Health Organization raised its alert level but stopped short of declaring a global emergency.

The suspected number of deaths rose to 149 in Mexico, the epicenter of the outbreak with nearly 2,000 people believed to be infected. In the United States the number of confirmed cases rose to at least 50. Worldwide there were 73 cases, including six in Canada, one in Spain, and two in Scotland.

While the total cases were still measured in hundreds, not thousands, Mexican Health Secretary Jose Angel Cordova said the epidemic was entering an extremely dangerous phase, with the number of people infected mushrooming even as authorities desperately ramped up defenses.

The WHO raised the alert level to Phase 4, meaning there is sustained human-to-human transmission of the virus causing outbreaks in at least one country. Its alert system was revised after bird flu in Asia began to spread in 2004, and Monday was the first time it was raised above Phase 3.

"At this time, containment is not a feasible option," as the virus has already spread to several other countries, said WHO Assistant Director-General Keiji Fukuda.

Putting an alert at Phases 4 or 5 signals that the virus is becoming increasingly adept at spreading among humans. That move could lead governments to set trade, travel and other restrictions aimed at limiting its spread.

Phase 6 is for a full-blown pandemic, characterized by outbreaks in at least two regions of the world.

It could take four to six months before the first batch of vaccines are available to fight the virus, WHO officials said.

Russia, Hong Kong, and Taiwan said they would quarantine visitors showing symptoms of the virus amid global fears of a pandemic, an epidemic spread over a large area, either a region or worldwide.

Mexico canceled school at all levels nationwide until May 6, and the Mexico City government said it was considering a complete shutdown, including all public transportation, if the death toll keeps rising. Labor Secretary Javier Lozano Alarcon said employers should isolate anyone showing up for work with fever, cough, sore throat or other signs of the flu.

Even some of Mexico's most treasured national holidays were affected by the swine flu alert.

Authorities announced the cancellation of the annual Cinco de Mayo parade, held to mark Mexican troops' defeat of a French army on May 5, 1862. The national labor umbrella group announced the cancellation of Mexico City's traditional May 1 parade and the National Institute of Anthropology and History said all of its 116 museums nationwide would be closed until further notice.

Amid the warnings, the Mexican government grappled with increasing criticism of its response. At least two weeks after the first swine flu case, the government has yet to say where and how the outbreak began or give details on the victims.

The health department lacked the staff to visit the homes of all those suspected to have died from the disease, Cordova said.

Cordova said 1,995 people have been hospitalized with serious cases of pneumonia since the first case of swine flu was reported April 13. The government does not yet know how many were swine flu.

He said tests show a 4-year-old boy contracted the virus before April 2 in Veracruz state, where a community has been protesting pollution from a large pig farm.

The farm is run by Granjas Carroll de Mexico, a joint venture half owned by Virginia-based Spokeswoman Keira Ullrich said the company has found no clinical signs or symptoms of the presence of swine flu in its herd or its employees working anywhere in Mexico.

Mexico's Agriculture Department said yesterday that its inspectors found no sign of swine flu among pigs around the farm in Veracruz, and that no infected pigs have been found yet anywhere in Mexico.

European Union Health Commissioner Androulla Vassiliou advised Europeans to avoid nonessential travel to Mexico and parts of the United States, although Dr. Richard Besser, acting director of the Centers for Disease Control and Prevention, said that including the United States in the advisory seemed unwarranted at this time.

State Department spokesman Robert A. Wood said Vassiliou's remarks were his "personal opinion," not an official EU position, and therefore the department had no comment.

"We don't want people to panic at this point," Wood said.

Many of the cases outside Mexico have been relatively mild. Symptoms include a fever of more than 100, coughing, joint aches, severe headache and, in some cases, vomiting and diarrhea.

WHO spokesman Peter Cordingley singled out air travel as an easy way the virus could spread, noting that the WHO estimates that up to 500,000 people are on planes at any time.

Governments in Asia - with potent memories of previous flu outbreaks - were especially cautious. Singapore, Thailand, Japan, Indonesia, and the Philippines dusted off thermal scanners used in the 2003 SARS crisis and were checking for signs of fever among passengers from North America. South Korea, India, and Indonesia also announced screening.

In Malaysia, health workers in face masks took the temperatures of passengers as they arrived on a flight from Los Angeles.

China said anyone experiencing flu-like symptoms within two weeks of arrival had to report to authorities.

China, Russia, and Ukraine were among countries banning imports of pork and pork products from Mexico and three US states that have reported swine flu cases, while other countries, such as Indonesia, banned all pork imports.

The CDC says people cannot get the flu by eating pork or pork products.

© Copyright 2009 Globe Newspaper Company.
Related Coverage
More swine flu coverage
Your comment is subject to the rules of our Posting Policy
This comment may appear on your public profile. Public Profile FAQ