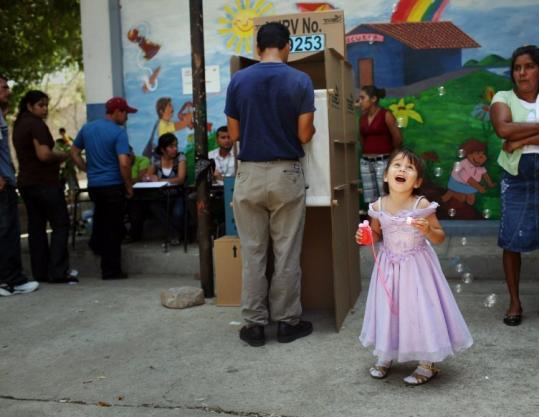 SAN SALVADOR - Salvadorans voted yesterday in a tight presidential election that pits a party founded by Marxist rebels against right-wing civil war foes who have governed since 1989.

Tens of thousands of Salvadoran immigrants in the United States flew home to vote in a tense race that has reopened wounds from the 1980-92 Cold War-era conflict.

Cars full of voters, dressed in their Sunday best or wearing party colors, clogged the capital San Salvador's chaotic streets as supporters of both parties honked horns and waved flags.

"It's time for a change. We are tired of this government. It promises things, but there are always more poor than rich," said Reina Cano, 22, a trainee lawyer. "Funes will be different. He's always been straight and honest."

With tensions running high after street clashes in recent days between militants from left and right, Funes urged his supporters to stay calm when he arrived to cast his vote, wearing a dapper gray suit.

Polls closed at 5 p.m. The first, and possibly definitive, results were expected within several hours.

A tight result could spark protests after a campaign blighted by civil war-era barbs. "The propaganda has been very ugly. . . . Neither side is going to accept losing," Dora Acosta, 59, said

Many voters want to join a shift to the left in Latin America, but others are squeamish at the idea of handing power to a party schooled in Cuban-style socialism as an economic crisis bites.