In Brazil, the fast decline of a protected rain forest 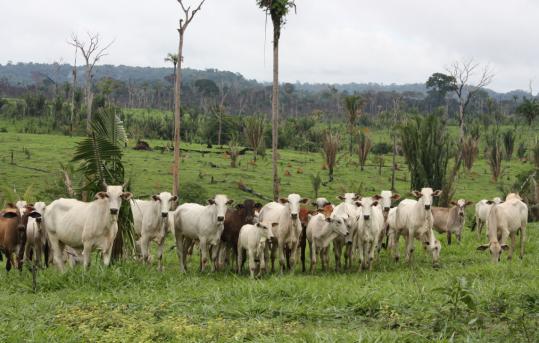 Cattle grazed on the denuded landscape of Bom Futuro National Forest in Brazil's western state of Rondonia. Settlers have united in anger over efforts to relocate them to save the rain forest. (Joshua Partlow/ Washington Post)
By Joshua Partlow Washington Post / February 8, 2009
Text size – +

BOM FUTURO NATIONAL FOREST, Brazil - Antonio Elson Portela had already passed acres of charred stumps and rows of corn and coffee plants when he drove up behind a flatbed truck hauling logs out of this Amazonian forest.

It was yet another affront to Portela, an environmental official responsible for protecting this rapidly dwindling national forest from settlers and loggers, but both Portela and the truck driver knew where things stood. The driver leaned out, smiled, and waved, casually. Portela gripped the steering wheel and flushed.

"I want to do something," he said, "but there is nothing I can do."

Brazil is considered a world leader in conserving its environmental bounty. The federal government late last year set ambitious goals to reduce deforestation by 70 percent over the next decade. It has demarcated more than 300,000 square miles as federally protected areas, a territory more than twice the size of the US national park system.

But as the case of Bom Futuro National Forest shows, such designations do not always prevent, or even slow, the destruction of the rain forest. Here, across 700,000 acres of rain forest in the western Brazilian state of Rondonia, poverty pushes settlers in search of new lands, and any attempt to interrupt has met with resentment and an adamant refusal to leave.

Across the Amazon, such development pressures are challenging Brazil's aspirations to halt the destruction of the world's largest rain forest. The stakes are particularly high not only because of the rich biological diversity and immense freshwater resources found here, but also because the rain forest plays an important role in removing gases from the atmosphere that contribute to global warming.

Scientists say about one-fifth of the world's greenhouse gas emissions come from cutting down rain forests - much of that from the Amazon. Brazil is one of the top four emitters of greenhouse gases in the world. More than 4,600 square miles of the Amazon were deforested last year.

In Bom Futuro, settlers and prospectors have carved out a hard living by cutting trees, despite environmental rules that declare their very presence illegal. Through last May, Bom Futuro had lost nearly 170,000 acres of forest, roughly a quarter of the park. At the current rate of deforestation, environmental officials estimate, half the forest will be pasture in five more years. By 2021, it will be gone.

"This is a very serious case. It's an example of total destruction of a protected area," said Carlos Minc, Brazil's environment minister. "We intend to take out the cattle, remove the trucks that are taking the wood illegally."

Last summer, the Environment Ministry and local environmental authorities drafted an aggressive plan to use military and police to relocate some of the park's roughly 3,000 residents and 50,000 cattle.

The 83-page "evacuation plan," intended to "reverse the alarming scene of environmental degradation," said it would be "difficult or impossible" to achieve any of the recovery plans without first throwing out the settlers. The plan also calls for erecting border checkpoints to control traffic into the park and reforesting degraded land.

Although environmental officials expect some form of the plan to begin soon, Minc has recently proposed adding protected territory outside the forest to make up for cleared land and to avoid a confrontation with residents. "No one in their right mind thinks that we will go there with tractors and knock down the churches, the schools, and the city itself." he said.

Inside Bom Futuro, the threat of action has nevertheless angered and worried the settlers, who have banded together in rejection of any effort to make them or their livestock budge.

"We have only God to protect us here," said Daniel Bernardo da Silva, a 60-year-old resident.