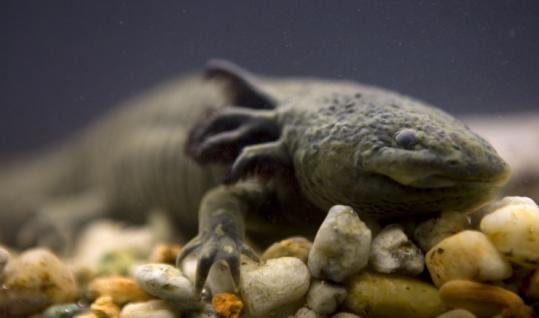 Scientists are debating ways to save the Axolotl salamander. This one is a resident of Chapultepec Zoo in Mexico City. (Dario Lopez-Mills/ Associated Press)
By David Koop Associated Press / November 6, 2008
Text size – +

MEXICO CITY - Beneath the tourist gondolas in the remains of a great Aztec lake lives a creature that resembles a monster - and a Muppet - with its slimy tail, plumage-like gills and mouth that curls into an odd smile.

The axolotl, also known as the "water monster" and the "Mexican walking fish," was a key part of Aztec legend and diet. Against all odds, it survived until now amid Mexico City's urban sprawl in the polluted canals of Lake Xochimilco, now a Venice-style destination for revelers poled along by Mexican gondoliers, or trajineros, in brightly painted party boats.

But scientists are racing to save the footlong salamander from extinction, a victim of the draining of its lake habitat and deteriorating water quality. In what may be the final blow, nonnative fish introduced into the canals are eating its lunch - and its babies.

The longstanding International Union for Conservation of Nature includes the axolotl on its annual Red List of threatened species, while researchers say it could disappear in just five years. Some are pushing for a series of axolotl sanctuaries in canals cleared of invasive species, while others are considering repopulating Xochimilco with axolotls bred in captivity.

"If the axolotl disappears, it would not only be a great loss to biodiversity but to Mexican culture, and would reflect the degeneration of a once-great lake system," says Luis Zambrano, a biologist at the Autonomous University of Mexico.

The number of axolotls (pronounced ACK-suh-LAH-tuhl) in the wild is not known. But the population has dropped from roughly 1,500 per square mile in 1998 to 25 per square mile this year, according to a survey by Zambrano's scientists using casting nets.

It has been a steep fall from grace for the salamander with a feathery mane of gills and a visage reminiscent of a 1970s Smiley Face that inspired American poet Ogden Nash to pen the witticism: "I've never met an axolotl, But Harvard has one in a bottle."

Millions once lived in the giant lakes of Xochimilco and Chalco on which Mexico City was built. Using four stubby legs to drag themselves along lake bottoms or their thick tails to swim like mini-alligators, they hunted plentiful aquatic insects, small fish, and crustaceans.

Legend has it that Xolotl - the dog-headed Aztec god of death, lightning, and monstrosities - feared he was about to be banished or killed by other gods and changed into an axolotl to flee into Lake Xochimilco.

The axolotl's decline began when Spanish conquerors started draining the lakes, which were further emptied over time to slake the thirst of one of the world's largest and fastest-growing cities.

In the 1970s, Lake Chalco was completely drained to prevent flooding. In the 1980s, Mexico City began pumping its wastewater into the few canals and lagoons that remained of Xochimilco.

About 20 years ago, African tilapia were introduced into Xochimilco in a misguided effort to create fisheries. They joined with Asian carp to dominate the ecosystem and eat the axolotl's eggs and compete with it for food. The axolotl is also threatened by agrochemical runoff from nearby farms and treated wastewater from a Mexico City sewage plant, researchers say.

Local fisherman Roberto Altamira, 32, recalls when he was a boy, and the axolotl was still part of the local diet.

But he says people no longer eat axolotls, mainly because fishermen almost never find them.

"The last one I caught was about six months ago," says Altamira, a wiry gondolier with rope-like muscles from years of poling through Xochimilco's narrow waterways.

Meanwhile, the axolotl population is burgeoning in laboratories, where scientists study its amazing traits, including the ability to re-grow lost limbs. Axolotls have played key roles in research on regeneration, embryology, fertilization, and evolution.

The salamander has the rare trait of retaining its larval features throughout its adult life, a phenomenon called neoteny. It lives all its life in the water but can breathe both under water with gills or by taking gulps of air from the surface.

So far, scientists disagree on how to save the creature.

But while the debate goes on, time is running out.

Given its role in research alone, said Bob Johnson, curator of amphibians and reptiles at the Toronto Zoo, "We owe it to the axolotl to help it survive."