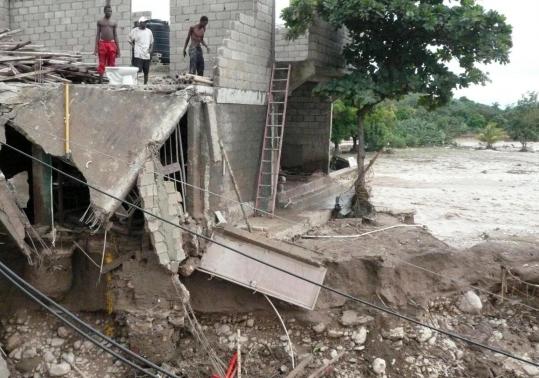 Residents stood on the second floor of a house damaged by Hurricane Ike in Cabaret, Haiti, yesterday. Victims were stacked in a funeral home in the town. At least 58 people died as Ike swept Haiti. (Nicolas Garcia/Associated Press)
By Will Weissert Associated Press / September 8, 2008
Text size – +

CAMAGUEY, Cuba - Hurricane Ike roared onto Cuba yesterday after destroying houses and crops on low-lying islands and worsening floods in Haiti that have already killed more than 300 people.

With Ike forecast to sweep the length of Cuba and possibly hit Havana head-on, hundreds of thousands evacuated to shelters or higher ground. To the north, residents of the Florida Keys fled up a narrow highway, fearful that the "extremely dangerous" hurricane could hit them tomorrow.

At least 58 people died as Ike's winds and rain swept Haiti yesterday - and officials found three more bodies from a previous storm - raising the nation's death toll from four tropical storms in less than a month to 319. A Dominican man was crushed by a falling tree.

Ike first slammed into the Turks and Caicos and the southernmost Bahamas islands as a Category 4 hurricane. Thousands rode out the storm in shelters and there was no immediate word of deaths on the low-lying islands.

Ike made landfall in eastern Cuba late last night, said meteorologist Todd Kimberlain at the US National Hurricane Center, and was forecast to hit Havana, the capital of 2 million people with many vulnerable old buildings, before it moves into the Gulf of Mexico early tomorrow morning.

At 11 p.m. EDT, Ike was a Category 3 hurricane with top sustained winds of 120 miles per hour. It was centered near near Cabo Lucretia, about 135 miles east of Camaguey, moving westward at 13 miles per hour.

State television broadcast images of the storm surge washing over coastal homes in the easternmost city of Bayamo and reported that dozens of dwellings were damaged beyond repair.

An informal AP tally of figures being released sporadically by eastern Cuban provinces indicated that more than 600,000 people had been evacuated by last night. Former President Fidel Castro released a written statement calling on Cubans to heed security measures to ensure no one dies.

Foreign tourists were pulled out from vulnerable beach resorts, workers rushed to protect coffee plants and other crops, and plans were under way to distribute food and cooking oil to disaster areas. "There's no fear here, but one has to be prepared. It could hit us pretty hard," said Ramon Olivera, gassing up his motorcycle in Camaguey, where municipal workers boarded up banks and restaurants before heavy rain started falling.

More than 100 people waited in chaotic bread lines at each of the numerous government bakeries around town as families hoarded supplies before the storm. And on provincial capital's outskirts, trucks and dented school buses brought about 1,000 evacuees to the sprawling campus of an art school.

Classrooms at the three-story school built on stilts were filled with metal bunk beds. The approaching hurricane brought a stiff breeze through the open windows.

Mirtha Perez, a 65-year-old retiree, said hardly anyone was left in her nearby town of Salome. "It's a huge evacuation," she said. "We are waiting and asking God to protect us and that nothing happens to us."

Strong gusts and steady rains fell at the US naval base at Guantanamo Bay in southeast Cuba, where all ferries were secured and beaches were off-limits. The military said cells containing terrorism detainees - about 255 men suspected of links to the Taliban and Al Qaeda - are hurricane-proof. But the base was spared the strongest winds.

The Turks and Caicos had little natural protection from storm surges of up to 18 feet. Premier Michael Misick said more than 80 percent of the homes were damaged on two of the British territory's islands and people who didn't take refuge in shelters were cowering in closets and under stairwells, "just holding on for life."

In South Caicos, a fishing-dependent island of 1,500 people, the airport was under water, power will be out for weeks, and at least 20 boats were swept away despite being towed ashore for safety, Minister of Natural Resources Piper Hanchell said.

The Bahamas' Great Inagua island was hit soon thereafter, and both of its shelters sprung leaks in the 135-mile-per-hour winds.

"It's nasty. I can't remember getting hit like this," reserve police officer Henry Nixon said from inside a shelter holding about 85 people, who peeked out at toppled trees and houses stripped of their roofs when Ike finally passed.

Great Inagua has about 1,000 people and about 50,000 West Indian flamingos - the world's largest breeding colony. Both populations sought safety from the winds and driving rain, with the pink flamingos gathering in mangrove thickets. Biologists worried that their unique habitat could be destroyed.

"There's a possibility that the habitat can't really be replaced, and that they can't find an equivalent spot," said Greg Butcher, bird conservation director for the National Audubon Society. "You might have a significant drop in the number of flamingos."

In flooded Haiti, Ike made an already grim situation abysmal. The coastal town of Cabaret was particularly hard hit - 21 victims were stacked in a mud-caked pile in a funeral home there, including two pregnant women, one with a dead girl still in her arms. More than a dozen children were in the pile.

Where Ike goes after Cuba was hard to predict, leaving millions from Florida to Mexico worrying where it will strike.

"These storms have a mind of their own," Florida's governor, Charlie Crist, said as tourists and then residents evacuated the Keys along a narrow highway.

In Louisiana, Governor Bobby Jindal and Mayor Ray Nagin of New Orleans prepared for the possibility of more havoc only days after a historic evacuation of more than 2 million people from Hurricane Gustav.

Some New Orleans residents were already digging in their heels ahead of Ike. David Myers, a 39-year-old physician who rode out Gustav with relatives in Baton Rouge before returning home to New Orleans on Tuesday, said it would take a Category 4 or 5 storm to chase him away again. He expects many other residents who ran from Gustav to balk at evacuating for Ike.

Christopher Gargiule, 37, said that evacuating for Gustav cost him and his wife, Joanne, more than $1,500, and that they can't afford to leave again even if Ike forces another mandatory evacuation of the city. They live in a house just 50 yards from a levee that water splashed over during Gustav.

"We're going to have to hunker down and cross our fingers," Gargiule said.