Violence leaves many in fear 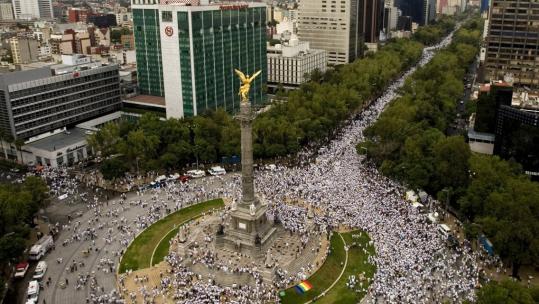 TIJUANA, Mexico - With a bingo hall, a dog track, and a vast room of slot machines, Casino Caliente has a fair share of shrieks and groans any night of the year. But when a team of heavily armed men dressed in black barged in and ordered everyone to the floor on a Friday night this month, the outbursts rose to an entirely different level.

"Everybody down!" the masked men shouted, adding expletives to make their point and urgently directing their automatic weapons this way and that. Panic filled the bingo hall, for no one knew what was to come next.

Gone are the days when Mexico's drug war was an abstraction for most people, something they lamented over the morning papers as if it were unfolding far away. Reminders are everywhere, from the radios blasting drug ballads that romanticize the criminals to the giant banners that drug cartels hang from overpasses to recruit killers and threaten rivals.

The Mexican-based traffickers that ship narcotics from South America to the United States are in a pitched battle with President Felipe Calderón's government, which has sent the army to trouble spots around the country to shut them down. Police agencies, infiltrated by the drug traffickers and lacking training, have not shown themselves to be up to the job.

The results have been mixed: There have been huge drug seizures and arrests of some kingpins, but also violent retaliation by the heavily armed traffickers, who have been killing law enforcement officers and many noncombatants as well.

Tens of thousands of Mexicans marched in Mexico City last night to protest against the wave of kidnappings and murders linked to the cartels, pressing Calderón to meet his promises to crack down on crime.

Holding candles and dressed in white, demonstrators on the capital's Paseo de la Reforma main street carried posters and pictures of kidnap victims and signs saying, "Enough Is Enough." Officials estimated the crowd at 50,000 shortly after the march began, but thousands continued to pour into the streets.

Thousands more attended demonstrations in other cities across the country last night. A similar mass protest four years ago drew a quarter of a million people.

The possibility that violence lurks at every intersection, dance floor, and town square has changed life in Mexico.

With increasing frequency, child-size chalk outlines are drawn on the asphalt at the latest homicide scene. Raids are carried out at baptism parties, at fancy restaurants, at bingo halls like the Caliente, where, it turned out, no shots were fired that night. The armed men proved to be federal police officers, and they quickly left with two men suspected of being traffickers in tow.

"Those who don't see the drug war going on around them have their heads stuck in the sand," said Jeannette Anaya, a Tijuana actress who is trying to mobilize the city's artistic community to rally for peace.

Two women and two girls were among the victims in an attack in Guerrero in recent days. This month, 13 people were killed at a family gathering in the mountains of Chihuahua, including several teenagers, a 4-year-old, and a 16-month-old. In all, 2,682 people have been killed in the drug war this year, including elderly bystanders, schoolchildren, and pregnant women, according to a tally by a newspaper, El Universal.

"The violent mass killings of people not connected to criminal organized violence, their cowardly executions, is intolerable for Mexico," said Jose Reyes Baeza, Chihuahua's governor, who has criticized the federal government's approach to the violence. "The trend is unacceptable and must be contained."

The wealthy bulletproof their vehicles, wear protective clothing, and move around with burly men wearing earpieces. But others with fewer resources resort to their makeshift measures to stay alive.

Manuel, a businessman in his early 40s who lives in Tijuana, avoids restaurants in the city, particularly those that serve food from Sinaloa, which has produced more top cartel leaders than any other state. His father is from Sinaloa, and he loves the shrimp tamales from the region, but he fears there is a greater chance that he might encounter thugs at restaurants that feature that food.

"Seafood is what they serve and it's the best," he said, refusing to provide his last name because of the fear that his words might come back to haunt him. "But I'd rather eat at home. How can I take my wife and my children to a restaurant when I don't know who the people are around? What happens if something goes wrong?"

He has reason to be rattled. His brother was grabbed from his Tijuana home nearly a year ago by masked men and has not been heard from since, one of numerous people who have disappeared in late-night raids linked to the drug cartels. "We all live in fear now," he said. "Any of us could be taken or killed."

"You have to be more careful with everything these days," said Jose Carlos Vizcarra, who heads an advisory group on crime in the border town of Mexicali.