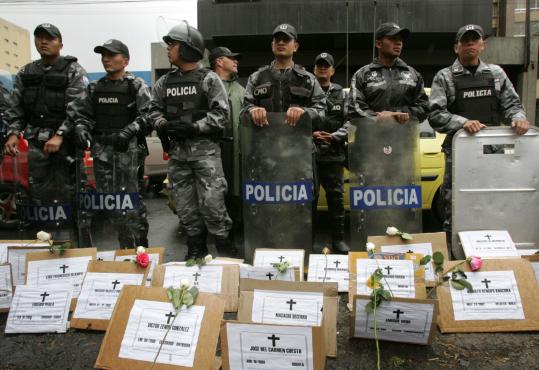 BOGOTA - Colombia's president says he repeatedly asked Ecuador to deal with Colombian rebels operating from its territory before he ordered the cross-border raid that has set off an international crisis.

The fallout is mounting: Venezuela threatened to slash trade and nationalize Colombian-owned businesses. Venezuela and Ecuador have sent troops to their borders with Colombia. And yesterday, Nicaragua broke off diplomatic relations with Colombia.

Latin American foreign ministers met in the Dominican Republic in hopes of finding a way to calm the region's tensest flare-up in years, and the presidents of Colombia, Venezuela, Ecuador, and at least nine other nations were flying in to join them.

Colombian President Alvaro Uribe's defense of his actions came during a three-hour session with news media representatives Wednesday night but his office did not authorize release of his comments until yesterday.

The conservative leader expressed frustration at what he called inaction by Ecuador's leftist government over Colombian guerrilla camps in its territory.

"What does one do when bandits are shooting from the other side and the government doesn't do anything?" Uribe asked. "It's my job to defend 43 million Colombians."

Ecuadoran President Rafael Correa has said his troops have raided dozens of rebel camps, but Colombian officials say the guerrillas are always tipped off so they can escape. Uribe said he did not notify Correa of Saturday's attack because "I was sure that the operation would have failed."

Uribe said the raid was the sixth since his 2002 election that was aimed at Raul Reyes, a top leader in the Revolutionary Armed Forces of Colombia, or FARC. Reyes was one of the 24 people killed.

Uribe refused to rule out more military incursions into Ecuador or Venezuela, saying he first needs assurances from Correa and his Venezuelan ally, leftist President Hugo Chávez, that they are not harboring rebels.

But Uribe stressed that he does not want war with any of his neighbors - that the thought "doesn't even cross our minds."

Venezuela and Ecuador have each sent thousands of soldiers to their borders with Colombia, but Uribe repeated that he will not mobilize troops from Colombia's army, which is bigger than both of his neighbors' combined.

Nicaragua broke off relations with Colombia over the attack inside Ecuador. President Daniel Ortega is a strong ally of Chávez and Correa, and Nicaragua has a longstanding maritime boundary dispute with Colombia.

Chávez, who has long criticized Uribe for being allied with the United States, said he would squeeze Venezuela's $6 billion in annual trade with Colombia.

That could create economic havoc, especially in Venezuela, which is already plagued by shortages of basic foods and imports Colombian products.

Colombia's finance minister said a cutoff in trade could cost his country 100,000 jobs.

In the Dominican capital of Santo Domingo, foreign ministers of the 20-nation Rio Group searched for a "peaceful, negotiated solution," Bolivia's foreign minister said. Presidents are to face off there today.