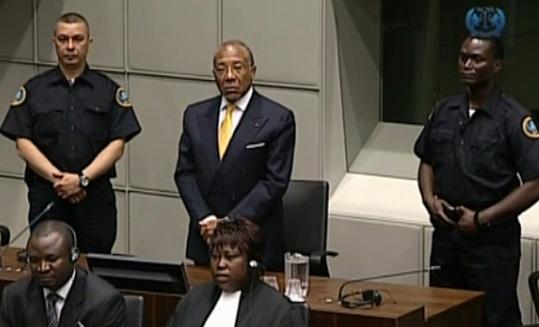 Former Liberian president Charles Taylor is the first former head of state to be convicted by an international tribunal since the Nuremberg trials at the end of World War II. He was sentenced by the international criminal court at the Hague. (AFP/Getty Images)
By J. David Goodman and Marlise Simons New York Times / May 31, 2012
Text size – +

LEIDSCHENDAM, Netherlands - Charles G. Taylor, the former president of Liberia and a once-powerful warlord, was sentenced Wednesday to 50 years in prison for his role in atrocities committed in Sierra Leone during its civil war in the 1990s.

In a watershed case for modern human rights law, Taylor is the first former head of state convicted by an international tribunal since the Nuremberg trials in Germany after World War II.

Taylor was found guilty of “aiding and abetting, as well as planning, some of the most heinous and brutal crimes recorded in human history,’’ said Richard Lussick, the judge who presided over the sentencing here in an international criminal court near The Hague.

He said the lengthy prison term underscored Taylor’s position as a government’s leader during the time the crimes were committed.

“Leadership must be carried out by example, by the prosecution of crimes, not the commission of crimes,’’ the judge said in a statement read before the court.

If carried out, the sentence is likely to mean that Taylor, 64, will spend the rest of his life in prison. He looked at the floor after he was asked to stand as the sentence was read.

His legal team said it would file an appeal.

“The sentence is clearly excessive, clearly disproportionate to his circumstances, his age and his health, and does not take into account the fact that he stepped down from office voluntarily,’’ said Morris Anya, one of Taylor’s lawyers.

The prosecution, which had sought an even longer sentence of 80 years, said it was considering its own appeal, to raise the level of responsibility attributed to Taylor for crimes committed under his leadership.

Two rebel commanders tried earlier were handed similar prison sentences of 50 and 52 years respectively, and a prosecutor said that Taylor’s overall responsibility was considerably greater. The court must set a precise prison term; it is not allowed to impose a life sentence or the death penalty.

The chief prosecutor, Brenda Hollis, said that Taylor did not freely leave office but was pushed by a rebel offensive and by a delegation of African leaders urging him to prevent further bloodshed.

“The sentence today does not replace amputated limbs; it does not bring back those who were murdered,’’ Hollis said. “It does not heal the wounds of those who were raped or forced to become sexual slaves.’’

Outside the courthouse, Salamba Silla, who works with victims’ groups in Sierra Leone, pleaded for more help for former child soldiers, orphans, people whose limbs were hacked off and other victims of the country’s war.

“You can see hundreds of them begging on the streets of Freetown,’’ the capital, she said. “Many who suffered horrendously need help to return to the provinces, they think they cannot survive there.’’

Ibrahim Sorie, a lawmaker from Sierra Leone who had been seated in the court’s public gallery, said the sentence was fair. “It restores our faith in the rule of law, and we see that impunity is ending for top people,’’ Sorie said.

By previous agreement, Taylor will serve his sentence in a British prison, but since the appeals process is expected to last at least a year, he will remain in the relative comfort of the United Nations’ detention center at The Hague.

After more than a year of deliberations, the Special Court for Sierra Leone found Taylor guilty in late April of crimes against humanity and war crimes for his part in fomenting mass brutality that included murder, rape, the use of child soldiers, the mutilation of thousands of civilians and the mining of diamonds to pay for guns and ammunition.

Prosecutors have said that Taylor was motivated in these gruesome actions not by any ideology but rather by “pure avarice’’ and a thirst for power.

The UN-backed tribunal began its work in Sierra Leone, where it tried its other cases, but out of concern that hearings in West Africa would cause unrest among those who still support Taylor, his trial was moved to this town in the Netherlands.

In Liberia, where Taylor began a civil war and amassed a record of human rights atrocities during his dictatorial rule, there has not been the political will or the resources to set up a tribunal.

The mandate of the Special Court for Sierra Leone covers only crimes in that country between 1996 and 2002, and because the tribunal is to be shut down, critics say that a number of people close to Taylor have escaped prosecution.

Eight other leading members of different forces and rebel groups have already been sentenced by the tribunal. Taylor is the special court’s last defendant. His trial began in 2006, and since then, 115 witnesses have given testimony.