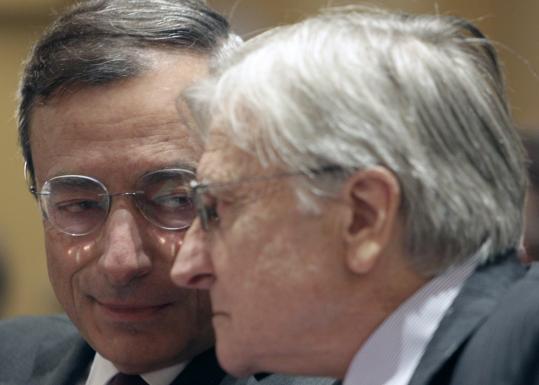 PARIS - As the stock and bond markets seem eerily similar to the dark days of 2008, Jean-Claude Trichet and Mario Draghi, the current and incoming chiefs of the European Central Bank, pointedly urged European leaders to move quickly to ensure that the eurozone’s debt crisis does not become seriously worse.

Europe needs to “make a quantum step up in economic and political integration,’’ Draghi said as the bond yields of Greece, Italy, and other countries with weak finances jumped yesterday amid investor fears that such efforts might be failing. He and Trichet addressed a forum in Paris that focused on the world three years after the collapse of Lehman Brothers.

Stock markets in Europe and Asia slumped yesterday amid worries about the health of the US economy and Europe’s sovereign debt woes.

US markets, which were closed for the Labor Day holiday, were expected to open lower today. The Dow Jones industrial average fell 2.2 percent Friday after a government report that no net jobs were created in August.

President Obama will deliver a jobs speech Thursday, a day before the Group of Seven wealthiest nations meet in Marseille to discuss the European and US economies. Washington wants to make sure that headwinds from Europe’s crisis do not cross the Atlantic while the US economy remains weak.

Draghi’s call goes to the heart of what politicians now acknowledge is a root cause of Europe’s crisis, but that few seem ready to change: the lack of a federal fiscal union that would make the euro zone look more like the United States.

The idea is something that Germany and others are wary of because it could undermine their national authority.

The calls for what defenders of sovereignty have called the “F word’’ - federalism - are growing louder, however, as investors warn that volatile financial markets are starting to look similar to the days surrounding Lehman Brothers’ collapse.

Trichet, who turns over the central bank presidency to Draghi at the end of October, renewed calls for a federal European government, with a federal finance ministry.

Those institutions would have the power to “impose decisions on countries’’ whose own policies threaten the rest of the euro union, Trichet said at the Paris conference, sponsored by the Institut Montaigne, a research group.

In Brussels, meanwhile, an unusual gathering of former European leaders, academics, and industrialists urged politicians to recognize that part of the answer to Europe’s ills was to give up some sovereignty to keep the euro alive.

“It has become clear that a monetary union without some form of fiscal federalism and coordinated economic policy will not work,’’ the group said in a statement.

“Either the Europeans move forward,’’ Roubini said, or face “a situation of potential breakup or disintegration.’’

Benoit d’Anglelin, a former Lehman banker for 15 years who is now a manager at Ondra Partners, a financial advisory firm in Paris, said he was seeing “extreme risk aversion now’’ by pension funds and institutional investors, who have been dumping “everything risk-related,’’ since March.

“It’s becoming unsustainable,’’ d’Anglelin said. “Imagine what will happen if the selling gets more serious.’’

Despite pledges by European leaders in July to pump billions of euros more into a European Union bailout fund for debt-stricken countries, known as the European Financial Stability Facility, it is not so clear that parliaments in the 17 countries in the eurozone will approve an expansion.

In fact, with a debt crisis threatening to worsen in Europe, and persistent US economic weakness, markets have been moving more quickly to punish countries whose politicians are slow to make crucial decisions.

“This is not going to go away,’’ Draghi said.

Members of the advisory group that gathered in Brussels, including Schroder, also expressed strong support for euro bonds.

Despite a fierce debate in Germany, Schroder said the German public could accept them - as long as there were strict controls placed on how and when they were issued.

Even if euro bonds win wider backing, other issues threaten to upend plans for a tighter monetary union to support the euro.