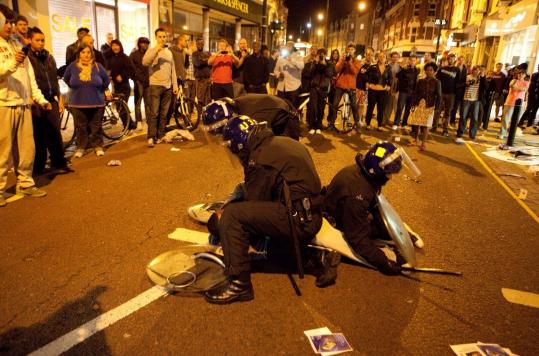 Police and political leaders say youths used social media to organize looting sprees during riots, such as this one in South London, that gripped England this month. (Simon Dawson/Associated Press)
By Jill Lawless Associated Press / August 26, 2011

LONDON - More than two weeks after riots, Britain’s government and police met social media executives yesterday to discuss how to prevent their services from being used to plot violence.

But authorities did not seek new powers to shut down Facebook, Twitter, or BlackBerry Messenger in times of crisis.

The four days of rioting, triggered by a fatal police shooting in north London’s Tottenham area on Aug. 4, were the worst civil disturbances to hit Britain since the 1980s and left a trail of looted stores, torched cars, and burned-out buildings in several English cities. Five people died in the violence, including three men run down by a car as they protected stores from looters in Birmingham.

Police and political leaders contend youths used social media to coordinate looting sprees. Prime Minister David Cameron has said police and intelligence agents would look at whether there should be limits on the use of social media sites or services like BlackBerry Messenger, which is simple and largely cost-free, in times of disorder.

Civil libertarians have reacted with alarm to suggestions the services could be shut down.

Rights organizations, including Amnesty International and Liberty, wrote an open letter to the government before the meeting with executives of Facebook, Twitter, and BlackBerry maker

The letter said “new measures, made in good faith but in a heated political environment, will overextend powers in ways that would be susceptible to abuse; restrict legitimate, free communication; and expression; and undermine people’s privacy.’’

A Home Office spokeswoman said before the meeting that there was “no suggestion’’ the sites would be closed down.

Afterwards, the government said the discussions “looked at how law enforcement and the networks can build on the existing relationships and cooperation to crack down on the networks being used for criminal behavior.’’

“The government did not seek any additional powers to close down social media networks,’’ a Home Office spokesman said on condition of anonymity in line with government policy.

Research In Motion called the meeting “positive and productive,’’ saying the company was “pleased to consult on the use of social media to engage and communicate during times of emergency.’’

Facebook said it already took down threats of violence and other offending material and was working on speeding the process.

“We look forward to meeting with the home secretary to explain the measures we have been taking to ensure that Facebook is a safe and positive platform for people in the UK at this challenging time,’’ the company said in a statement.

Several people have been charged with using social media to incite riots, including two men who were jailed for four years each for using Facebook to “organize and orchestrate’’ disorder. The riots the two called for never happened.

A senior police officer revealed last week that the force had considered seeking approval to switch off such services like Twitter during the mayhem, but decided against it.

The acting chief of London’s police force, Tim Godwin, told lawmakers that the legality of such action was “very questionable’’ and that social networks were a useful intelligence asset.

Police used Twitter to provide information updates during the riots and said they sent officers to protect major London shopping centers and the 2012 Olympics sites after intercepting messages on Twitter and BlackBerry Messenger saying they were targets for rioters.

The issue of curbing communications is extremely sensitive for democratic governments.

Earlier this month, transit authorities in the San Francisco area cut cell phone and wireless data service in subway stations to disrupt plans for a protest.