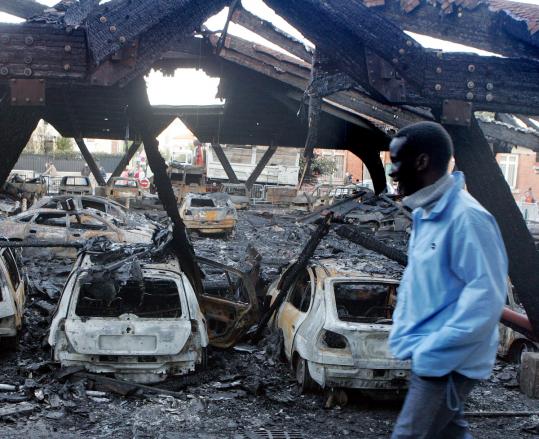 Riots in France in 2005 by disaffected youths targeted public property. Those in Britain this month have had a wider scope. (Jacques Brinon/Associated Press/File 2005)
By Angela Charlton and Elaine Ganley Associated Press / August 12, 2011

PARIS - To many in France, the fiery scenes of rioting youth and overwhelmed police around British cities are painfully familiar, mirroring the flames of anger in French suburbs in 2005.

Some reasons for the unrest are similar - seething anger, high unemployment, and a chilling event involving police - but the way the violence played out in Britain has highlighted differences. And it has laid bare how little has been done in France to solve the problems that set neighborhoods nationwide aflame for 24 days straight six years back.

When France’s riots raged in 2005, cars and public property including schools and bus stops were the prime targets of arson attacks, unlike the random looting and the torching of stores and residential buildings by British youth today.

But noted French criminologist Alain Bauer argues “it’s still the same process’’: In both countries, despairing youths outside the mainstream, often but not always minorities, are dealing with pent-up frustration and alienation.

The disenfranchised live “with anger, with unemployment, and with greed . . . the wish to have the same things, the same labels that you can find in the really rich world,’’ Bauer said.

Those who rampaged in Britain were a more diverse lot than those in France, where mainly immigrants and French of immigrant origin in the largely Muslim housing projects erupted in anger. But in each case, many rioters have seen themselves as outsiders fighting an indifferent system.

“The social mechanisms of segregation are identical,’’ said Sebastian Roche, professor at Grenoble’s Institute for Political Studies who closely followed the French riots. “We have two countries, two former colonial empires that today have shrunk and that have taken in [the colonial] populations . . . and we’re in a situation of economic crisis, high unemployment.’’

The French riots were sparked by the accidental deaths of two teenagers electrocuted in a power substation while hiding from police chasing them in the heavily immigrant northeast Paris suburb of Clichy-Sous-Bois.

In each case, the populations involved lack schooling and qualifications to get jobs and integrate into the mainstream. And in each case, their neighborhoods were at the receiving end of spending cuts.

But a key difference in the way urban life is laid out in France and Britain may go some way to explaining the difference in how the two waves of unrest unfolded.

In Britain, deprived neighborhoods often lie shoulder-to-shoulder with well-off districts. The deprived quarters of France are, above all, in the outlying housing projects that ring major cities, often with poor public transport to connect them.

Neither French nor British forces were prepared for a sudden, large-scale eruption of angry violence. In France the unrest raged uncontrolled for weeks in far-flung, vast, isolated areas dominated by rioters. Police in Britain faced smaller, albeit more mobile, pockets of unrest in London and other cities.

The riots in France led to strong doubts about a major point of pride in this country - its model of integration that, unlike the multicultural creed, demands that everyone take on the attributes of Frenchness, forsaking his or her origins.

Britain, by contrast, has embraced multiculturalism, which celebrates the differences among ethnic communities.

The riots in each country have underscored tensions in these social models.

Modern technology has also played a role in the differences. British police were faced with rioters who rampaged beyond their own neighborhoods, using BlackBerrys and Twitter as tools to get out the call to wreak havoc.

Twitter did not exist during the 2005 France riots, and the rich neighborhoods of Paris were far away from the troubled suburbs home to the rioters.

“In France, there was a sense of awareness that the riots were about something worse than we originally thought,’’ said Michel Wieviorka, a sociologist who has studied social unrest. “We had let these neighborhoods turn into ghettos. . . .. There was a certain comprehension of the source of the criminality.’’

In Britain, he said, “it is a small group of violent people that is not trying to explain itself other than through violence.’’