Scotland Yard turns to Bratton for help on gangs 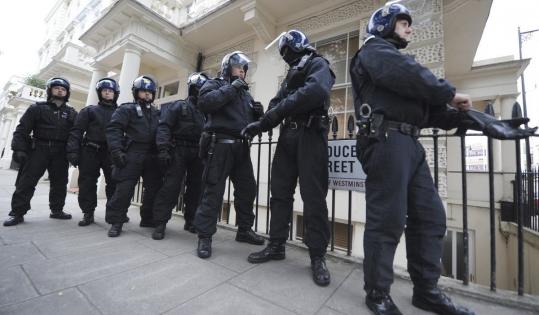 LONDON - Seeking to reestablish his authority after England’s worst rioting in decades, Prime Minister David Cameron told an emergency session of Parliament yesterday that the authorities would consider curfews, constraining smartphones and social networking sites, and filling some police functions with soldiers to keep more officers on the street.

He said he would consult a former New York City and Boston police commissioner, William Bratton, who presided over a record drop in crime in the 1990s, on ways to counter criminal gangs.

Cameron said police were authorized to use plastic-coated bullets against rioters and that plans were in place to deploy water cannons when appropriate.

“Nothing should be off the table,’’ he said. “Every contingency is being looked at.’’

He promised swift justice, even as the authorities turned to a tough reckoning after the days of rioting, looting, and arson, with courts in several cities open through the night.

The police said more than 1,200 people had been arrested, mostly in London, since the frenzy of violence broke out Saturday. The situation eased only after thousands of police reinforcements flooded the streets of London and other cities.

The convulsions of violence prompted widespread criticism of police for an ineffective initial response and deeper failures including corruption and collusion exposed by the broadening phone hacking scandal.

Few members of British society were spared: Politicians came under fire for failing to break off summer vacations immediately to confront events; and they in turn denounced a society that has allowed hooliganism, public drunkenness, and gang culture, including thuggish behavior toward the weak and disabled.

Cameron echoed some of those criticisms in the marathon appearance in Parliament yesterday, wrapping himself in his Conservative Party’s law-and-order banner to grapple for almost three hours with his most serious political challenge since taking office in May 2010.

For the first time, Cameron said police commanders had acknowledged that they had misjudged the situation and deployed too few officers.

“Initially, the police treated the situation too much as a public order issue rather than essentially one of crime,’’ he told the summoned lawmakers, blaming a wide social breakdown for the violence.

“This is not about poverty, it’s about culture,’’ he said, “a culture that glorifies violence, shows disrespect to authority, and says everything about rights but nothing about responsibilities.

“We will not let a violent few beat us,’’ Cameron told the summoned lawmakers. “We will not put up with this in our country. We will not allow a culture of fear to exist on our streets, and we will do whatever it takes to restore law and order and to rebuild our communities.

“We need to show the world, which has looked on frankly appalled, that the perpetrators of the violence we have seen on our streets are not in any way representative of our country - nor of our young people,’’ he said. “We need to show them that we will address our broken society, we will restore a stronger sense of morality and responsibility - in every town, in every street, and in every estate.’’

The violence started in the gritty north London neighborhood of Tottenham, after a lethal police shooting.

Cameron said there was evidence that criminal gangs had been behind the wave of arson and looting that ensued. Cameron said he would consult Bratton, who presided over a major drop in crime in New York City in the mid-1990s, headed police forces in Boston and Los Angeles, and is now chairman of a New York-based security company, Kroll Associates, that advises police forces around the world.

Cameron had also recently mentioned Bratton in connection with the hunt for new leadership at Scotland Yard, as London’s Metropolitan Police is known.

The force has been shaken by the scandal over phone hacking; its top two officials have resigned, and its longtime spokesman was placed on extended leave as investigations continued into earlier flawed police inquiries into the hacking and accusations of police bribery.

But the idea of nominating Bratton met with strong resistance from British police authorities and others who said the head of the Scotland Yard was by tradition a Briton.

London police said 922 people had been arrested and 401 charged with offenses since the violence took root Saturday, while the Manchester police in the northwest put the total of arrests there at 145, with similar numbers detained in Birmingham in the English Midlands.