Mother of another slain girl may have been hacked by paper

UK tabloid gave her cellphone for use in crusade 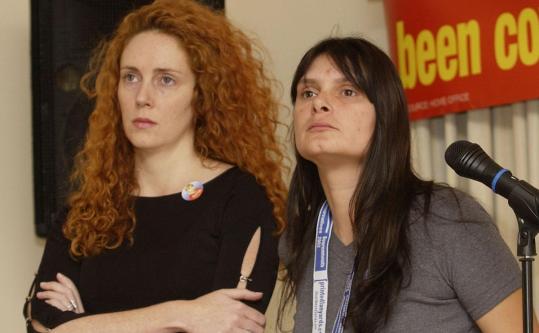 LONDON - Even in the worst of times, Sara Payne was a defender of Rupert Murdoch’s News of the World. She thought she had good reason.

After her 8-year-old daughter was killed by a convicted pedophile living a few miles away, Payne credited the feisty tabloid with helping her campaign for a new British law giving parents the right to know if anyone with regular access to their children is a sex offender.

But in a case generating a fresh uproar in Britain over the nefarious methods of News of the World, Payne acknowledged yesterday that she might have been among the thousands of British citizens targeted by the paper in a widespread campaign of illegal phone hacking. What’s more, the paper’s editors reportedly had given her the cellphone as a gift so that she could more easily communicate with her growing legion of supporters nationwide.

The revelations again put Murdoch’s under a blinding spotlight at a time when some politicians here are calling for the company’s vast British media holdings to be broken up, saying it does not meet the criteria that media owners here be fit and proper companies. It also dealt another blow to Scotland Yard, which had earlier told Payne she was not among those targeted by the tabloid, a position it only recently corrected.

More than anything, though, Payne’s involvement in the scandal robs News Corp. of one of its most sympathetic voices.

Earlier this month, Payne had bemoaned Murdoch’s decision to shut down the tabloid after revelations that its employees had hacked the phone of a different young murder victim - hampering a police investigation in the process. Payne chided the newspaper for hacking phones, including that of the girl, Milly Dowler. But she nevertheless described the 168-year-old paper’s closure as “the passing of an old friend’’ in a piece she penned for its final edition.

Yesterday, however, the charity Payne cofounded put out a statement on her behalf, saying: “Sara is absolutely devastated by this news, we’re all deeply disappointed and are just working to get her through it. Sara will continue to work with the proper authorities regarding this matter.’’

Payne’s targeting could spell fresh trouble for Rebekah Brooks, who resigned as head of News Corp.’s British operations this month and is facing criminal charges tied to the hacking scandal. When serving as the editor of News of the World in the early 2000s, Brooks closely directed the paper’s coverage of Payne’s crusade. She has denied any knowledge of illegal newsgathering at News of the World.

In a statement, Brooks denied reports that she had given the targeted phone to Payne, saying it was not a personal gift but instead presented to her on behalf of the paper. Brooks said the allegations were “abhorrent and particularly upsetting as Sara Payne is a dear friend.’’

The news came just as the independent inquiry into the scandal officially launched yesterday, with Lord Justice Brian Henry Levenson, who is leading the investigation, saying it could take 12 months or longer to complete. Hearings would begin this fall, with the mandate of the inquiry now broadened to explore illicit activities among not only newspapers, but also television and social media in Britain.

“It may be tempting for a number of people to close ranks and suggest that the problem is or was local to a group of journalists then operating at the News of the World,’’ he said. “But I would encourage all to take a wider picture of the public good and help me grapple with the width and depth of the problem.’’