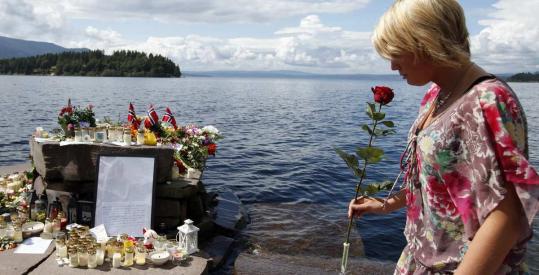 A woman paid her respects yesterday to the victims of Friday’s killing spree, at a temporary memorial on Utoya. The police have been criticized for the seemingly slow pace of their response to the island attack. (Fabrizio Bensch/ Reuters)
By Michael Schwirtz New York Times / July 28, 2011

OSLO -The prime minister of Norway acknowledged yesterday that his country had fundamentally changed as a result of the attacks on a youth camp and government complex last week, but he vowed to protect the culture of openness that is a source of Norwegian pride.

The attacks have prompted officials to start reassessing Norway’s policy on public security, which seemed defined by the belief that bad things happen elsewhere. Andres Behring Breivik, a self-called Christian crusader who has admitted to the attacks, appeared to face few obstacles when he detonated a car bomb on a busy government plaza last Friday, killing eight people, and then traveled 19 miles and took a ferry to the youth camp on the island of Utoya, where he slaughtered at least 68 people.

“It’s absolutely possible to have an open, democratic, inclusive society, and at the same time have security measures and not be naive,’’ the prime minister, Jens Stoltenberg, told reporters in Oslo. “I think what we have seen is that there is going to be one Norway before and one Norway after July 22,’’ he said. “But I hope and also believe that the Norway we will see after will be more open, a more tolerant society than what we had before.’’

Stoltenberg announced that the government would create a commission independent of the police to investigate the attacks as well as law enforcement agencies’ response to them.

The police have been criticized for the seemingly slow pace of their response. It took SWAT commandos about 90 minutes to reach the island, a delay that critics say probably cost lives. Helicopters were unavailable, and police had to commandeer civilian boats to reach the island.

Police officers from the precinct in Honefoss, close to Utoya, offered new details about the operation in a news conference yesterday.

Havard Gasbakk, the duty commander at the precinct, said that 10 commandos took two civilian boats to reach the island. His colleague, Magne Rustad, said one of the boats encountered engine trouble, but said this did not cause significant delays. By the time police officers arrived, Breivik seemed satisfied with the extent of his killing. They found him standing with his hands behind his head, his weapons thrown to the ground.

Breivik’s ability to avoid detection in the months and weeks leading up to the attacks has puzzled some. Though he spent months holed up on a farm he had rented north of Oslo, compiling weapons and building his bomb, all while writing inflammatory anti-Muslim commentary on blogs, officials said he remained under the radar.

A Norwegian security official with knowledge of the investigation said Breivik had appeared on a list of buyers from a Polish chemical firm police were investigating, but said that at the time his activities appeared legal.

“Normally these kind of people make an error,’’ said the official, who requested anonymity. “But he didn’t.’’

The police are trying to determine whether Breivik had help in planning the attacks. He has claimed to be part of an organization called the Knights Templar, which he said had cells active in other countries, but investigators have challenged this claim.

“So far we don’t have any evidence of the cells, neither in Norway or in Britain,’’ Janne Kristiansen, the head of Norway’s domestic intelligence service, told the BBC. Kristiansen also disputed an assessment made by Breivik’s lawyer that his client was probably insane.

“He’s calculating, he’s focused, he’s been going on with his plan for years, and this is not what I have learned a person who is insane will do.’’