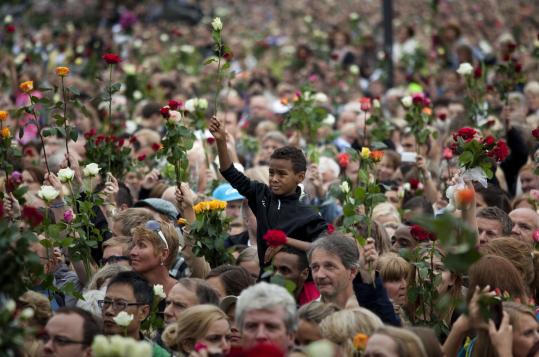 Thousands of people gathered outside Oslo City Hall yesterday to participate in a “rose march” in memory of the victims of Friday’s bomb attack and youth camp shooting massacre. Authorities now say eight people died in the bombing and 68, not 86, at the camp. (Emilio Morenatti/ Associated Press)
By Steven Erlanger and Alan Cowell New York Times / July 26, 2011

OSLO - The 32-year-old man accused of horrifying twin attacks in Norway now maintains that two cells of extremists collaborated with him, court officials said yesterday as they ordered solitary confinement for the suspect.

Police also significantly reduced the confirmed death toll in the Friday attacks to 76 instead of 93. It is still one of the worst mass killings in postwar Europe.

It was not immediately clear how police miscounted the number of dead, which happened as rescuers were attempting to tally the victims of the summer camp shooting. The police earlier said 86 had died at the camp and yesterday lowered the number to 68.

They also revised upward the number of dead in the bombing, from seven to eight.

Breivik appeared at a closed arraignment hearing as Norwegians paused for a minute’s silence to mark the deaths.

While acknowledging that he carried out the attacks, Breivik “has not pleaded guilty,’’ Judge Kim Heger told a televised news conference, in remarks translated by an official of the court.

The judge said Breivik had been charged under criminal law with “acts of terrorism,’’ including an attempt to “disturb or destroy the functions of society, such as the government’’ and to spread “serious fear’’ among the population.

Breivik was ordered to be held for the next eight weeks, the first four in solitary confinement. He told police that there were “two further cells in our organization,’’ reporters were told.

Breivik is the only person accused so far in the attacks, in which a huge bomb exploded in central Oslo, followed by a shooting rampage against a camp run by the ruling Labor Party on the nearby island of Utoya.

In testimony, Heger said, Breivik had said he “believes that he needed to carry out these acts to save Norway’’ and Western Europe from “cultural Marxism and Muslim domination.’’

The court appearance was Breivik’s first since he was captured Friday.

Through his lawyer, he had indicated that he wanted to use the hearing as a platform and had wished to appear wearing some kind of uniform. The court rejected those requests.

The judge said Breivik had wished to “give a sharp signal’’ and inflict “the worst possible loss’’ on the Labor Party, accusing it of failing to prevent a “mass importing of Muslims’’ into Norway.

Shortly before Breivik’s arrival, the court said in a statement that the detention hearing should be held behind closed doors.

“It is clear that there is concrete information that a public hearing with the suspect present could quickly lead to an extraordinary and very difficult situation in terms of the investigation and security,’’ the court said.

Minutes earlier, as noon approached, Prime Minister Jens Stoltenberg stood before crowds of people and urged them “to remember the victims. I hereby declare one minute’s silence across our country.’’

All that could be heard in some places was the cry of gulls as trams stopped, cars pulled over, and Norwegians bowed their heads, standing to attention with their hands clasped in prayer. Even after the formal 60 seconds, many seemed reluctant to move on, locked in private thoughts.

Rescue workers in red suits and fluorescent jackets stood in silence on a lakeshore near Utoya, where 68 of the dead perished Friday in a rampage of gunfire that lasted at least 90 minutes.

The minute’s silence in central Oslo and elsewhere came after a morning when people gathered quietly, some in tears, to contemplate the spreading blanket of bouquets in front of the Oslo Cathedral. An estimated 150,000 people filled the city’s streets to mourn the dead with a “rose march.’’ Entire streets were awash in flowers.

Crown Prince Haakon spoke of “a street being filled with love,’’ bringing his wife, Crown Princess Mette-Marit, to tears. “We have the power to meet hate with togetherness. We have chosen what we stand for,’’ he said.

The hunt for evidence spread yesterday to southern France, where, the Associated Press reported, gendarmes searched the house of the suspect’s father, Jens Breivik, who was said earlier to have lost contact with his son many years ago. It was not clear what the officers were looking for or what they had found.

Norwegian police and security services, meanwhile, faced questions about their slow response to the reports of shooting on Utoya, where the country’s governing Labor Party was holding its annual political summer camp, considered Norway’s nursery school for future leaders.

The police took an hour to arrive on the island after the first reports, and officials said that it was hard to find boats and that their helicopters were capable of only surveillance, not of shooting down the killer.

The attacks have also spurred a public debate about whether all Norway police officers should be armed. By law, Norwegian police officers must have authorization from their chiefs to gain access to a firearm, but they have rarely needed to ask, until recently.

Violent crime has been steadily increasing in the country, jolting a society used to leaving doors unlocked and children to play without fear.

“Criminals are now carrying weapons, so some people now think that police officers should have weapons as well,’’ said Gry Jorunn Holmen, a spokeswoman for the Norwegian police union.

Norway is one of only three Western European countries lacking a fully armed police force. Most police officers in the United Kingdom and Ireland do not carry firearms, either.

Some speculated that Breivik had wanted an open court proceeding in order to further publicize his antiimmigrant, anti-Muslim ideas, which center around the conservation of cultural and Christian values in the face of what he sees as a continuing effort by Islam to conquer Europe since the Ottomans were stopped at the gates of Vienna in 1683.