Strikes, protests to go on through austerity voting 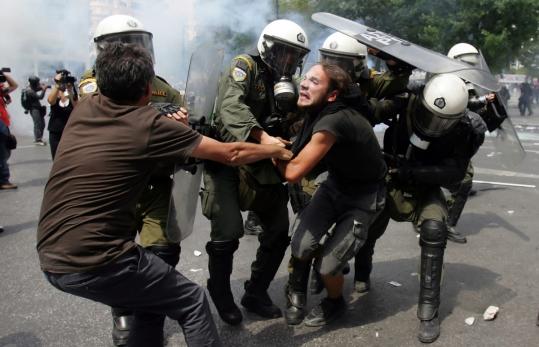 ATHENS — Hours of rioting outside Greece’s Parliament injured 46 people yesterday on the eve of a vote by lawmakers to adopt more painful austerity measures, a condition for bailout funds needed to prevent a potentially disastrous default.

At least 14 people were arrested, authorities said, as youths sporadically clashed with riot police for more than 10 hours and into the night, leaving the city center filled with tear gas and strewn with smashed marble paving stones.

Unions had begun a 48-hour strike that shut down services and staged mass rallies throughout the capital in another day of chaotic protests.

The new austerity measures must be passed in a two-part vote today and tomorrow before Greece’s international creditors will release the next batch of the country’s more than $100 billion bailout fund. That would prevent a default that could drag down European banks and shake the European and world economy.

“Voting these measures is required to maintain our credibility in the [bailout] process,’’ Finance Minister Evangelos Venizelos said. “Voting for these measures, regardless of any reservations, is an important, brave act of political responsibility.’’

The Socialist government, which survived a revolt by party dissenters this month, is again taking them on by imposing the punishing four-year program of spending cuts and tax hikes on even those earning minimum wages — prompting anger inside Parliament and out on the street. The government has a majority of just five seats in the 300-member assembly.

More than 5,000 police officers will again be on hand today to try to thwart plans by protesters to block lawmakers’ access to Parliament.

“The austerity measures are not only harsh, not only unfair, but they are also ineffective,’’ Socialist critic Vasso Papandreou told Parliament late yesterday. Still, she said she would grudgingly vote for the bill.

“Greece has many problems, but the real problem is the eurozone,’’ said Papandreou, a former EU commissioner. “Europe should be a zone of solidarity, but it is a jungle where the banks can do what they like.’’

Police and health officials said 37 police officers and nine protesters were hurt in yesterday’s clashes. Rioters set fire to giant parasols at an outdoor cafe, using some to form barricades, and smashed windows of a McDonald’s outlet and other snack shops. Staff at upscale hotels handed out surgical masks to tourists and helped them to roll luggage past the rioting, over ground strewn with rubble.

Later, youths set fire to a satellite truck, which rolled downhill into a kiosk whose freezer exploded. Hooded youths ducked behind the burning truck to help themselves to ice-cream cones.

“The situation that the workers are going through is tragic, and we are near poverty levels,’’ said Spyros Linardopoulos, a protester with the union blockading the port of Piraeus earlier in the day. “The government has declared war, and to this war we will answer back with war.’’

Unions attracted 20,000 protesters to rallies in Athens and plan more downtown protests today as most services will remain shut down.

Bailout eurozone members Greece, Portugal, and Ireland account for only about 6 percent of the common-currency area output but have caused a crisis for Europe’s monetary project.