Prosecutor urges Khadafy’s inner circle to turn him in 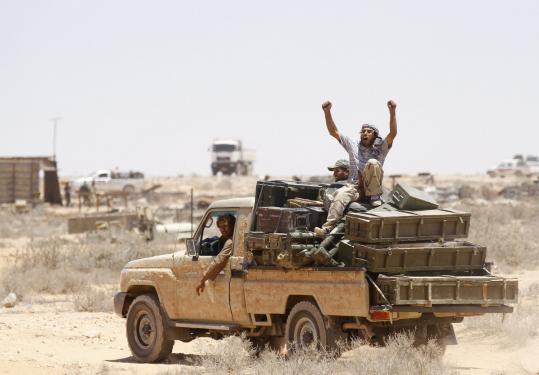 THE HAGUE — The prosecutor of the International Criminal Court urged Moammar Khadafy’s aides yesterday to arrest the Libyan leader and turn him over for trial on murder and persecution charges — or risk prosecution themselves.

As battles raged through a fifth month between Khadafy’s forces and rebels backed by NATO air strikes, prosecutor Luis Moreno-Ocampo was optimistic that Khadafy’s regime would be over within three months.

On Monday, the court issued arrest warrants for the Libyan leader, his son Seif, and intelligence chief Abdullah Al Sanusi, accused of crimes against humanity. But the court has no police force and relies on the law enforcement agencies of the 115 countries that ratified the court’s founding statute.

Libya is not a member, but Moreno-Ocampo advised Khadafy’s inner circle to arrest their leader.

NATO forces operating in Libyan skies have no mandate to arrest suspects, he said. And NATO itself has said it does not want to put combat forces on the ground. The prosecutor said the other option for arresting Khadafy is through the rebels fighting to end his more than four decades in power.

The court’s enforcement problems were underscored this week by the trip to China by President Omar al-Bashir of Sudan, who was charged last year by the international court with genocide in Darfur.

China is a permanent member of the UN Security Council, which authorized the court to investigate the Darfur conflict.

“China is not a signatory of the ICC . . . and we reserve our opinion on the ICC’s prosecution of Bashir,’’ Hong Lei, Foreign Ministry spokesman, told a news conference in Beijing. The United States also is not a signatory to the court’s statute.

But Moreno-Ocampo is confident the international consensus to remove Khadafy is stronger than in the case of Darfur.

“If we have enough energy within the states, in two, three months it’s game over,’’ he said.

Even if it takes much longer to detain Khadafy, Moreno-Ocampo insisted he will eventually be tried.

He cited the arrest last month of former Bosnian Serb military chief Ratko Mladic after 15 years on the run as an example of how internationally wanted suspects almost always end up in court.

“It’s a matter of time. See what happened with Mladic,’’ Moreno-Ocampo said. “Bashir’s destiny is to face justice, Khadafy will face justice. The arrest warrants are not going away.’’

Speaking in Cambodia, where the trial of four Khmer Rouge leaders has begun, Stephen Rapp, US war crimes ambassador, agreed that the long-awaited Cambodian trials and Mladic’s arrest sent a clear signal: “If you commit these crimes, there will be consequences.’’

Khadafy’s regime has rejected the court’s authority and dismissed the charges as politically motivated.

“This court is nothing but a cover for the military operations of NATO,’’ said Justice Minister Mohammed al-Qamudi.

But the court’s presiding judge, Sanji Monageng of Botswana, said Khadafy and his inner circle reacted to uprisings in Tunisia and Egypt by mapping out a “state policy . . . aimed at deterring and quelling by any means — including by the use of lethal force — demonstrations by civilians against the regime.’’

Hundreds of civilians were killed, injured, or arrested in the last two weeks of February, and the judge said there were “reasonable grounds to believe’’ that Khadafy and his supporters were responsible for the murder and persecution of civilians as well as attempting to cover up the crimes.