Pope promotes marriage, children as he wraps up visit to Croatia 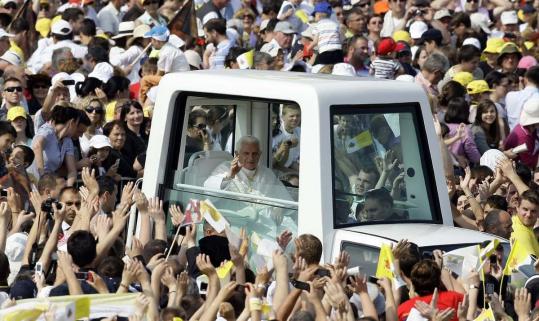 Pope Benedict XVI waved as he arrived to lead a Mass in Zagreb, Croatia. About 400,000 people attended during the local church’s national day of families. (Marko Djurica/Reuters)
Associated Press / June 6, 2011

ZAGREB, Croatia — Pope Benedict XVI wrapped up his visit to Croatia yesterday by denouncing the “disintegration’’ of family life in Europe and calling for couples to make a commitment to marry and have children, not just live together.

Benedict stressed traditional Catholic family values, including opposition to abortion, during an open-air Mass attended by about 400,000 people at Zagreb’s hippodrome, the highlight of his trip to mark the local church’s national day of families.

The faithful, who came in droves from across Croatia and surrounding countries, arrived before dawn at the field muddied by overnight thunderstorms. The sun shone through the clouds as Benedict celebrated Mass before a crowd of flag-waving faithful whose numbers exceeded estimates of 300,000 and whose devotion seemed to impress the pontiff deeply.

Later, Benedict prayed before the tomb of a Croatian World War II-era cardinal hailed by Catholics for opposing communism but criticized by Jews for sympathizing with the Nazis.

It was Benedict’s first visit as pope to Croatia, an overwhelmingly Catholic Balkan nation that is poised to soon join the European Union.

The Vatican has strongly supported its bid, eager to see another country with shared values join the 27-member bloc and help Benedict’s project of rekindling Europe’s sense of its Christian heritage.

While Croatia is nearly 90 percent Catholic, it allows some legal rights for same-sex couples.