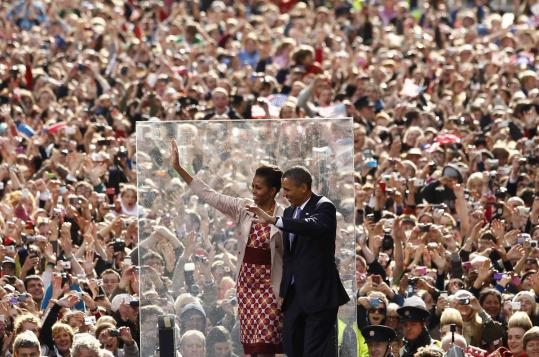 MONEYGALL, Ireland — President Obama may not be related to everybody in this postage-stamp Irish hamlet of 300, which claims him as its native son. But yesterday, he appeared determined to hug, kiss, shake hands, or raise a glass with every last one of them.

“He held my hand, he drew me close, and he kissed me on the cheek,’’ said an ecstatic Anne Maher, 50, who was wearing a red cap with the words “Obama Moneygall 2011’’ on it. “I’m not going to wash that cheek for a lifetime. And my husband isn’t getting near it, either.’’

In a jubilant visit that included raising a pint of Guinness at Ollie Hayes’s Bar, a stop at a house once lived in by his great-great-great grandfather, and quite possibly the most garrulous rope line he has ever worked, Obama made a familiar pilgrimage for an American president: going back to his Irish roots.

The president’s ancestor, Fulmouth Kearney, came to the United States in 1850 at the height of Ireland’s Great Famine. He was related to Obama’s Kansas-born mother.

Obama got a look at Kearney’s baptism records, which established his connection to the town, and even got to meet and drink with a distant family member: Henry Healy, a 26-year-old accountant for a plumbing company.

The Moneygall visit was the emotional highlight of a 12-hour visit to Ireland by the president, as he kicks off a six-day tour of Europe that will also take him to Britain, France, and Poland — and immerse him in thorny issues like the military campaign in Libya and upheaval elsewhere in the Arab world.

Obama’s itinerary is already under threat from an ash cloud spewed by an erupting volcano in Iceland. To get ahead of the cloud, which is drifting over Scotland, the White House said the president would fly to London last night rather than stay overnight in Dublin.

Obama delivered a speech at the historic College Green at Trinity College in Dublin that celebrated the enduring bond between the Irish and Americans, one unblemished by rifts over peace negotiations or counterterrorism policy.

“I’m Barack Obama, from the Moneygall Obamas,’’ he said to a fired-up crowd of 25,000. “And I’ve come home to find the apostrophe that we lost somewhere along the way.’’

After poking fun at the questions back home about where he was born, Obama told the story of Kearney, a shoemaker’s son from Moneygall, who sailed for New York at the age of 19 and later married a woman from Ohio.

In going to Ireland’s bucolic hinterland, Obama was retracing the steps of John F. Kennedy, Ronald Reagan, and Bill Clinton. But this product of Kenya and Kansas learned of his Irish connection only in 2007, when a curious churchman looked up his mother’s family records. Those ancient papers were shown to Obama yesterday.

Healy, who is said to be an eighth cousin of Obama, has become something of a celebrity around town, earning the nickname Henry VIII. He waited for his moment with crowds, four deep, stretching a quarter of a mile up Moneygall’s main street, which was lined with Irish and American flags.

Ireland had just taken down the Union Jacks that greeted Queen Elizabeth during her landmark visit last week. Obama cited that as evidence of the progress Ireland and Britain had made in putting the violence known as the Troubles behind them.

“The economy needs a lift, the people need a lift, and this brings a big lift,’’ said John Kennedy, a county official named after John F. Kennedy, whose Irish visit came in 1963, the year he was born. Nearby, John Donovan, 44, waited to welcome Obama to his well-kept house, which was where Kearney once lived. “I’m so nervous I can’t talk,’’ said Donovan, who listed his occupations — in “descending order’’ — as shopkeeper, funeral director, and farmer.

Moneygall’s association with Obama has transformed it into an instant tourist destination.

At Ollie’s Bar, the president’s heaviest task was waiting to let the foam on his pint subside before drinking it. “You tell me when it’s properly settled,’’ Obama said to Hayes, after he drew the pint. “I don’t want to mess this up.’’ Plunking money on the bar, he added, “I just want you to know the president pays.’’

Standing in the pub’s low-ceiling room, surrounded by distant relatives and those who claimed they were, Obama said: “There are millions of Americans who trace their ancestry back to this beautiful island. Part of what makes it so special is because the Irish influence on American culture is so powerful in the arts, in politics, in commerce.’’

Earlier in the day, the president and Michelle Obama were welcomed by President Mary McAleese, a lawyer and a native of Northern Ireland, who watched as Obama helped plant an Irish upright oak tree in a garden behind the presidential residence in Dublin (a sequoia planted by Kennedy swayed nearby).

In a private meeting, a senior White House official said, McAleese told Obama that her son, then living in the United States, woke her by phone early one morning in 2004 to tell her he was canvassing for a young politician that he believed would one day be elected president of the United States.

“Did he tell you it was a Gaelic name?’’ Obama replied. Meeting Prime Minister Enda Kenny, Obama voiced solidarity with Ireland as it struggles with the economic fallout caused by a collapsing real estate market and insolvent banks. “For the United States, Ireland carries a blood link,’’ the president said.