Putting the O’ in Obama

Tomorrow, the president visits the Irish hamlet his mother’s ancestors hail from. A kind of craze precedes him 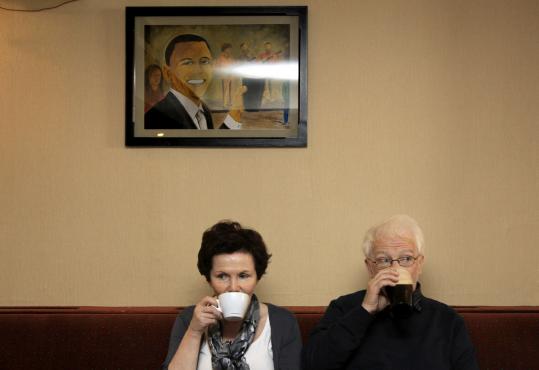 “Ollie’s is bigger and busier, very modern,’’ she allowed. “This is a small, traditional, simple pub.’’

She started a pint for her lone customer and smiled. The only sound was a ticking clock.

President Obama will arrive here in his ancestral village tomorrow, and he’s expected to step into at least one of the two pubs that sit directly opposite each other on Main Street in this sleepy home to 300 people.

Everybody assumes it will be Ollie Hayes’s place that gets the money shot, President Obama hoisting a pint of Guinness. After all, it was Ollie, along with the local Anglican Stephen Neill and Obama’s distant cousin Henry Healy, who improbably, incredibly persuaded the White House to come to this tiny hamlet in middle-of-nowhere County Offaly, about 85 miles southwest of Dublin, on the first day of his weeklong European swing.

But 80-year-old Julia Hayes, wife of Ollie’s uncle Joe, believes in hope and change. She hopes that “your man Obama’’ might wander across Main Street to sample her wares or at least give her a hug.

“He’s a lovely man, your President Obama,’’ she said, a photograph of the American president over her shoulder, next to the whiskey and a collection box for African missionaries. In Ireland’s country pubs, there used to be pictures of Jack Kennedy behind the bar. Here, it’s Obama. Things change.

She also has a plastic figurine of Obama that plays snippets of his speeches.

“We can’t have a thriving Wall Street,’’ the figurine says, “when Main Street is suffering.’’

Main Street in Moneygall is suddenly thriving. It cuts right through the village, and if you sneezed a couple of times in the car, you’d be past it.

New shops have opened. Everything’s been painted. The village’s first restaurant — The Obama Cafe, what else? — is on the way.

Obama is coming here, ostensibly because Falmouth Kearney, his great-great-great-grandfather on his mother’s side, left here in 1850 for America. This is good politics for Obama, but it’s much more to the people of Moneygall.

This is the biggest thing to happen in Moneygall since, well, since . . . Actually, nothing big has ever happened in Moneygall. This has put them on the map. And in a once-rich country that is suddenly, spectacularly broke, the president’s impending visit has unleashed a can-do, entrepreneurial spirit that is an inspiration to the rest of Ireland.

Mossie Hayes, a lovely fella, died two years ago, and his sweet shop had been vacant since. But Billy Hayes, Ollie’s nephew, just opened it to sell Obama T-shirts and sweatshirts. He’s made 15 different kinds. One of the best sellers is “What’s The Craic, Barack?’’

“We’ve had to explain to some of the Americans coming in that it’s not that kind of crack,’’ Billy Hayes, 26, was saying. “We had a tour bus of Americans come through, and one guy said, ‘We don’t like Obama.’ That’s fair enough. But people in Moneygall like him.’’

Did I mention that a lot of people in Moneygall are named Hayes?

Back at Julia’s, the proprietress stood back to admire her handiwork. The creamy head settled perfectly.

“Now,’’ she said, placing it down gently, like a piece of crystal, “wouldn’t the president enjoy one of these?’’

Julia Hayes started pouring pints in neighboring County Tipperary in 1948 when she was Julia Ryan. She and Joe had been widowed when they married 24 years ago.

You’d be lucky to get 25 people inside Julia’s. The one-room pub is a little bit bigger than her living room, which you can see through the opened door behind the bar. Two years ago, a truck backed in too close and smashed the Guinness sign on the pub’s façade. Guinness ignored Julia’s pleas for a new sign, until they found out Obama was coming.

“They just put the sign up this morning,’’ Julia said. “Obama gets things done.’’

I asked Julia how the locals distinguish between the two pubs.

It was pretty complicated over at Ollie’s. There were people tugging at him. Reporters from Germany and France. The White House advance team. TV cameras. Some Chinese tourists wandered in. The traditional musicians, from central casting, were giving it a lash.

“It’s a zoo,’’ Ollie Hayes said, wiping his brow. “I’m just trying to enjoy it. And I’ll tell you something: I’ve lived here my whole life, and this has brought the whole town together like nothing before.’’

Canon Stephen Neill, wearing a collar that looked like the top of one of Julia Hayes’s perfectly poured pints, was chatting with the local troupe of “Yes We Can’’ step dancers who will perform for the president.

He said Obama’s visit comes at a time when all of Ireland, not just Moneygall, needs a boost.

“If you walk around the town, you see the cosmetic changes, the paint,’’ he said. “But it’s more than that. It’s a great distraction from our economic woes. It helps people to believe in themselves again. We need that.’’

I went back to Julia’s to say goodbye. She was beaming.

“The Secret Service were just here,’’ she said. “They were handsome men, I’ll tell you.’’

Getting checked out by guys wearing trench coats and earpieces might unnerve some. Not Julia. It meant she was in the game. It meant your man might stop in for a quick one, one for the ditch, after all.

“I have a feeling he will,’’ Julia Hayes said.

She looked off, then shook her head.