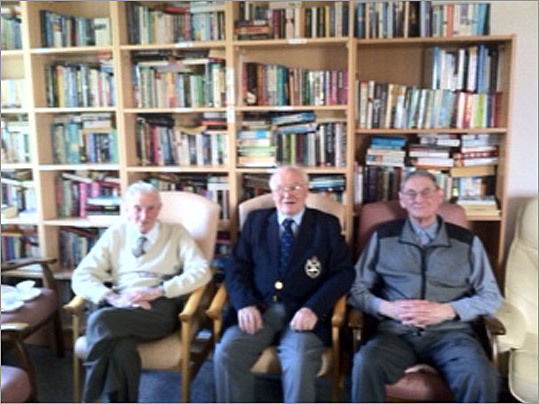 LEOPARDSTOWN, Ireland — They sat there, three old soldiers, watching the television in a room lined with books and memories.

On the TV, Queen Elizabeth II was standing in the Irish National War Memorial Garden, 9 miles away at Islandbridge, paying tribute to the Irishmen who died in British uniforms in two world wars.

Redmond wore a British uniform, for the Royal Air Force. He flew 36 missions over Nazi Germany as a rear gunner.

Wetherall joined the British Army when he was 17 years old. Two years later, he flew a glider into Arnhem, behind German lines on the Lower Rhine.

John Crisp was a student at Trinity College in Dublin when the Nazis invaded Poland.

“Ireland was neutral, but I couldn’t be,’’ he said.

He left the safe confines of cobblestoned Trinity College and not long after he was driving tanks across North Africa, chasing Nazis with his French and American allies.

And so they sat there yesterday, in the Leopardstown Park Hospital, which opened in 1917 to take care of Irishmen who wore the British uniform. Having been part of history, now they were watching it, a British queen welcomed to Ireland, a bitter history buried like so many of their friends who never made it back to Ireland from war.

Redmond is 89 years old. Crisp is 87. Wetherall is the baby at 86. They were part of the Greatest Generation. They saved the free world. But when they came back to Ireland, they weren’t celebrated. They weren’t appreciated.

“We were made to feel invisible,’’ Redmond said.

Those who fought in World War II didn’t fight for Ireland, but the free world. The Irishmen who fought in World War I, including the 49,000 who died, fought for a different reason. They thought that their decision to join the British war effort would lead to home rule for Ireland. But it didn’t happen that way, and instead the Irish fought the British for their independence.

The three old soldiers watched the screen as the queen walked onto the deep green pitch at Croke Park, home of Ireland’s national games of Gaelic football and hurling. It was there, in 1920, that British soldiers opened fire on unarmed spectators, killing 14 of them, a reprisal for the Irish Republican Army’s assassination of a dozen British agents in Dublin.

Earlier, the queen sat with Enda Kenny — Ireland’s taoiseach, or prime minister — under a portrait of Michael Collins, the IRA leader who orchestrated the wipeout of the British agents.

“She’s drawing a line under all of it,’’ Crisp said. “It’s about reconciliation, and it’s about time.’’

Wetherall is a war hero. After landing his glider at Arnhem, he got out and started firing. He got shot in the face, losing his right eye. The Germans dragged him to a POW camp. And when they weren’t looking, he escaped.

But after the war, he got a job in a car factory here in Ireland and learned “that you didn’t go around talking about the war,’’ he said. “You just learned to keep your big mouth shut.’’

Crisp came back to his native Dublin and initially sensed that Britain’s central role in defeating the Axis powers was appreciated. But attitudes hardened. Irish nationalism had not yet figured out a way to give the British credit for anything.

“Eventually, I ended up being quiet about my military past,’’ he said. “It just was something you didn’t talk about. It invited abuse. And when I thought about how many of my friends died in the war, it was very difficult to accept that it was not socially acceptable to say you fought the Nazis.’’

Women who went door to door in Ireland, selling red poppies that raised money for British forces veterans, “were often greeted with terrible abuse,’’ Crisp said. “You couldn’t wear a poppy on the streets.’’

“We were unwanted people,’’ said Redmond, who came back from war, became a doctor, and spent 35 years in Africa helping poor people.

The three old soldiers give most credit to Ireland’s last two presidents, Mary Robinson and Mary McAleese, for leading the cultural change, so that Irish service in British uniforms can be accepted and honored. After she was elected in 1990, Robinson attended an Armistice Day ceremony, breaking a taboo.

McAleese shattered the taboo by wearing a poppy soon after her election in 1997, showing that it could be an Irish custom as much as a British one. She and the queen went to Belgium to honor the Irish and British dead.

“The two ladies, the two Marys, have done us proud,’’ Crisp said.

The three old soldiers were proud that the queen had gone to the Garden of Remembrance a day earlier to honor Irish rebels who fought British forces.

“It’s perfectly correct that we should honor the founding fathers of this country,’’ Crisp said, “just as we should honor British veterans and the fact that joining the British Army does not make you anti-Irish.’’

Crisp looked up at the TV, and the queen was walking around Croke Park, a place once defined by atrocity, now defined by reconciliation.

“For too long, it was not respectable to be us,’’ he said, and Redmond and Wetherall were nodding. “Now it’s respectable again.’’

I left them in the afternoon light. Three old soldiers. Three great men who don’t have to hide in their own country anymore.