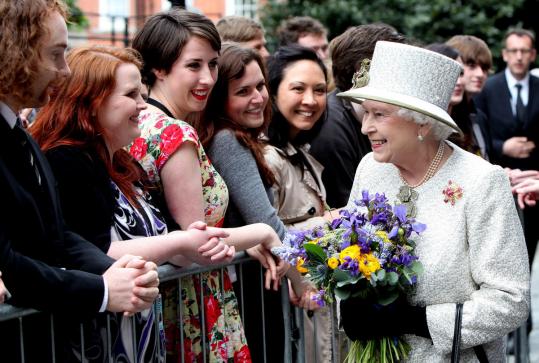 Queen Elizabeth II greeted students and staff at Trinity College yesterday at the start of a historic visit to Ireland. (Tony Maxwell/ Pool)
By Kevin Cullen Globe Staff / May 18, 2011

DUBLIN — Queen Elizabeth II bowed her head yesterday as she laid a wreath here in the Garden of Remembrance, dedicated to those who died fighting her government, while a military band played the Irish and British national anthems.

The brief but striking ceremony was the most poignant of public events on a day that saw a British monarch set foot in the Republic of Ireland for the first time since 1911, when Ireland was still part of the United Kingdom.

The sight of the queen in the Garden of Remembrance, honoring people long considered terrorists by the British, would have been unthinkable not long ago.

It was also the moment that most enraged nationalists who oppose the queen’s visit.

As the queen placed the wreath before the “Children of Lir,’’ a sculpture designed to mark the 50th anniversary of the 1921 truce between Irish and British forces in Ireland’s War of Independence, jeers could be heard from a group of republicans on nearby Parnell Street. Republicans also released hundreds of black balloons in the middle of the ceremony, but the wind carried them quickly to the east and the queen did not appear to see them.

More ominously, Irish police defused a pipe bomb on a bus in Maynooth, outside Dublin, just hours before the queen arrived. But the ability of the Irish police to intercept the bus, which was bound for Dublin from County Mayo, was testament to how dissident republicans bent on wrecking the queen’s visit are infiltrated with informers.

As much as the Irish and British governments wanted to focus attention on how positive their relationship has become, there were repeated reminders of the bad old days, including scuffles between police and protesters. At one point, firecrackers, bottles, and rocks were thrown at police on Dublin’s north side. At least 20 people were arrested, but there were no reported injuries. Police said the day came off better than expected. More protests are planned during the queen’s four-day visit.

Just by coming here, the queen accomplished the impossible: Dublin traffic was actually worse. Some 25 miles of metal barriers have been put up, and parking in the city centre was virtually impossible. So great is the concern for her safety that police ruled out any spontaneous mingling with ordinary Irish people.

The emphasis on security left the crowds along O’Connell Street, Dublin’s main thoroughfare, noticeably thin as the queen’s motorcade passed.

The queen unwittingly provided Irish police with their first overtime windfall in two years. Some 10,000 police and soldiers have been deployed to protect her, the biggest security operation in the history of the state, costing an estimated $42 million.

The Irish government considers it money well spent, the queen’s visit amounting to the symbolic end to centuries of Anglo-Irish conflict. And the government believes a successful visit will attract more tourists, especially English ones, when the Irish economy desperately needs an infusion of cash.

Everywhere the queen went yesterday was steeped in the tortured history of Anglo-Irish relations and the promise of a new chapter that began with the 1998 Good Friday Agreement ending the war in Northern Ireland. She arrived at an airfield named for Sir Roger Casement, a British diplomat who was hanged for helping the Irish rebels who staged the Easter Rising in 1916. Casement’s legacy captures Anglo-Irish complexity: a traitor to the British, a hero to the Irish.

The queen stepped off the plane wearing an emerald green jacket and hat that made her look something like a staff member of Aer Lingus, Ireland’s national airline. Her official dresser is named Angela Kelly, born to Irish parents in Liverpool.

The queen was greeted at Aras an Uachtarain, the presidential mansion, by Ireland’s president, Mary McAleese. McAleese — who grew up in Belfast amid the Troubles in Northern Ireland, losing friends and neighbors and almost her brother to violence — was fiercely determined to have the queen visit Ireland before her second seven-year term as president ends later this year.

McAleese described the queen’s visit as “an extraordinary moment in Irish history, a phenomenal sign of the success of the peace process, and absolutely the right moment for us to welcome on to Irish soil Her Majesty the Queen, the head of state of our immediate next-door neighbors, the people with whom we are forging a new future, a future very, very different from the past, on very different terms from the past.’’

Brian Leeson — the chairman of Eirigi, a socialist republican group — called the queen’s visit “a gross insult and a monumental waste of money when this state can’t afford to pay for its hospitals and schools.’’ Leeson would not even refer to the queen as the queen.

“The only words I want to hear from Windsor’s lips is ‘we are withdrawing from the six counties of Ireland,’ ’’ he said.

After the wreath-laying at the Garden of Remembrance, the queen, accompanied by her husband, Prince Philip, took a short ride down O’Connell Street to Trinity College, founded in 1592 by Queen Elizabeth I. She was greeted by Trinity staff members and students. Student Rebecca Kilkelly, whose great-grandmother gave a bouquet to Queen Victoria more than a century ago, handed flowers to the queen.

Former Irish prime minister Bertie Ahern, who spent much of his time in office working with Tony Blair, then Britain’s prime minister, to end the conflict in Northern Ireland, was visibly moved after the ceremony at the Garden of Remembrance.

“Anyone who understands Irish history would understand that this was a very important moment in Irish history,’’ he said, moments after the queen’s black Range Rover drove off.

His successor — Brian Cowen, whose government was unceremoniously kicked out over the economic meltdown here — agreed. “It was a fitting tribute to the men of 1916,’’ he said.

The queen’s visit dominated Irish news coverage. But the second story on the national broadcast news had much more to do with Ireland’s present than its past: A medical devices company in County Cork announced it was laying off 140 workers.

Kevin Cullen can be reached at cullen@globe.com.