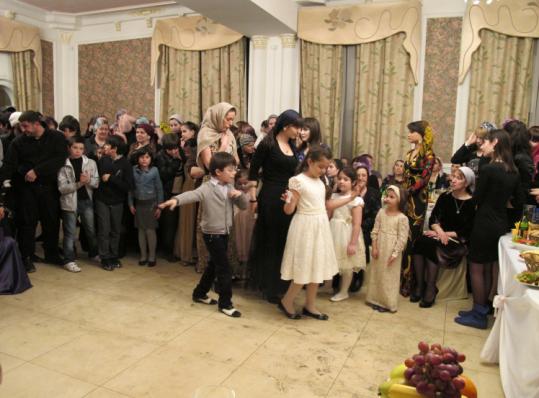 GROZNY, Russia — The capital of Chechnya, left in rubble at the end of two savage wars with Moscow, has been remarkably rebuilt with new apartment buildings, a gold-leafed museum, an enormous mosque — and heavily armed men posted throughout the city who hint at the unspoken bargain that holds the peace.

The armed men answer not to Moscow but to Ramzan Kadyrov, the former warlord whom Vladimir Putin appointed president of the Chechen Republic in Russia’s North Caucasus Mountains four years ago, letting him do as he wished in return for subduing his rebellious people.

Kadyrov runs the Muslim region as his personal fiefdom, with a private militia and his own men on the police force, who have been accused of abductions, torture, and murder. Establishing the veneer of a separate Islamic state, Kadyrov orders women to wear headscarves, encourages polygamy, and observes elements of sharia law, all in violation of Russian law and contrary to more liberal Chechen tradition.

Now Moscow has rendered a verdict on its roughshod lieutenant: He is about to begin five more years in office, thanks to President Dmitry Medvedev.

Even though Putin has systematically consolidated his power over regional leaders — in 2004 making their office appointed rather than elected — and Medvedev often lauds the rule of law, the two Russian leaders appear to have little control here and no choice but to applaud Kadyrov’s second inauguration Tuesday.

“Ramzan Kadyrov has created a state within a state,’’ said Sergei Markedonov, a Moscow analyst now in Washington as a visiting fellow at the Center for Strategic and International Studies. “I think he holds the Russian leadership hostage. There are no ways to replace him. I think that’s the greatest problem.’’

Recently, Kadyrov summoned a group of foreign journalists visiting Grozny to a late-night meeting in the heavily fortified presidential compound. Bounding in to a conference room close to midnight, after keeping the reporters waiting for two hours, Kadyrov deflected questions about human rights violations and asserted he honors Russian law.

“Russia gave us the mission to destroy terrorism and extinguish it in the North Caucasus,’’ Kadyrov said, “and results have already been achieved.’’

Although terrorism has lessened, it has not been eliminated, disturbing to the West, which fears brutal rule will only nurture more violence. The two Chechen wars, from 1994 to 1996 and 1999 to 2003, left up to 50,000 dead, mostly civilians, and provoked brutality among Russian soldiers and Chechen fighters, eventually setting off a wave of terrorism — the hostage-taking at a Moscow theater in 2002, the Beslan school siege of 2004, Moscow subway bombings last year, and the Domodedovo airport bombing in January among them.

Kadyrov frequently proclaims his loyalty to Putin — a giant photo of the Russian prime minister adorns the control tower at the Grozny airport — but his power now comes from his own force of arms rather than from Moscow’s political authority. In deference to Kadyrov, Moscow withdrew most of its troops in 2009 and those few remaining stay hidden in barracks.

“If something should happen to Kadyrov, what does Russia do then?’’ said Kimberly Marten, a Columbia University professor. “The whole relationship with Chechnya is based on one man. There are probably some Russian troops left, but they are under the direction of local security forces.’’

Marten, who has just finished a book on warlords and states, calls it outsourcing sovereignty. Putin, she suggests, was willing to cede authority to have Kadyrov control what Putin could not.

“The irony is that Russia now has what amounts to an autonomous Chechnya,’’ she said, “after it fought two wars to stop Chechen autonomy.’’

Markedonov pointed out that although the Kremlin removed politically powerful leaders it opposed, such as Moscow Mayor Yuri Luzhkov, Kadyrov has guns.

“I cannot imagine the day when Putin or Medvedev would invite him in and say, ‘Dear Ramzan, sorry, you are free, you are no longer president of Chechnya,’ ’’ Markedonov said.

Kadyrov told reporters that there are only 68 militants in Chechnya and that he knows all of their names. One is Doku Umarov, a militant linked with Al Qaeda who asserted responsibility for the subway and airport bombings and who causes enough concern in the United States that the State Department last summer put him on its list of known terrorists. “Soon our hands will reach Umarov,’’ Kadyrov said.

The Memorial human rights organization said 2009 saw at least 93 abductions and 30 murders in Chechnya, which has a population of just over 1 million. Memorial suggested that the actual number was three or four times higher, but that people were too frightened to report the crimes.