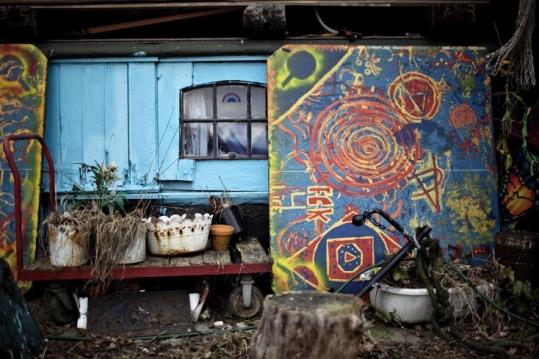 The Danish government wants to “normalize’’ the four-decade old neighborhood of Christiania, built on an old naval base. (Joachim Adrian/Polfoto via Associated Press)
Associated Press / February 19, 2011

COPENHAGEN — The Danish government yesterday won a legal battle against a freewheeling neighborhood that has remained largely self-governing since its creation by hippie squatters four decades ago.

The Supreme Court upheld a lower court decision from 2009 saying the roughly 900 residents of Christiania have no irrevocable right to use the former naval base as their home.

The decision ends a six-year legal standoff and means the government can go ahead with plans to “normalize’’ the neighborhood and tear down scores of ramshackle homes built at the site without permits.

Residents say they will resist any attempts to evict them from the neighborhood, which has become a major draw for tourists curious about its counterculture lifestyle and liberal attitude toward soft drugs.

“The court process is now finished,’’ Christiania spokesman Thomas Ertman said. “We have to now look to the future and need to sit down with the state and work out a negotiation for Christiania.’’

Christiania was formed in 1971 when hippies moved into an abandoned naval base and built an alternative society with houses painted in psychedelic colors and hashish traded and smoked in the open, while authorities turned a blind eye.

That all changed when a center-right government took power in 2001. Initially authorities cracked down on the drug trade, which had been taken over by criminal gangs, then they launched a plan to redevelop the area, charge residents rent, and allow outsiders to move in.

Residents don’t pay rent, but a fixed, monthly fee of $290 for electricity, water, and other municipal services.