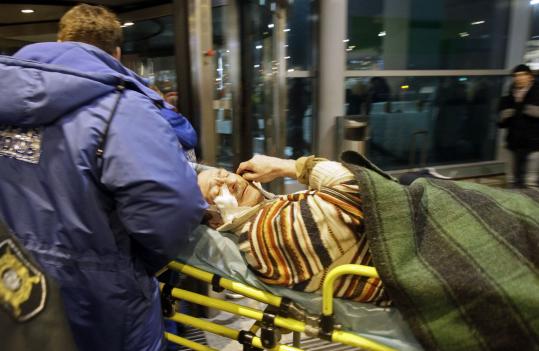 There was no indication last night of who was behind the blast. But past terrorist attacks have been traced to militants in the North Caucasus, a predominantly Muslim region in the south of Russia.

The bomb — set off in the international arrivals hall of the glittering Domodedovo airport — created such a pall of thick smoke that it was difficult to count the dead. Hours later, arriving passengers stepped into the hall to see the wounded still being loaded onto stretchers. Ambulances sped away crowded with three or four patients apiece, bleeding heavily from shrapnel wounds.

“They pushed them away on baggage carts,’’ said Aleksei Spiridonov, who works at an auto rental booth a few yards from the site of the blast. “They were wheeling them out on whatever they could find.’’

By nightfall, officials reported that visitors from the West were among the wounded and the dead, something that has occurred very rarely in previous terrorist attacks.

The bombing inflicted a deep injury on Moscow’s image just as President Dmitry A. Medvedev prepared to woo foreign investors at the World Economic Forum in Davos, Switzerland. He gave brief televised remarks almost immediately, telling Russians that he believed the blast was a terrorist act.

And though scheduled to give a keynote address in Davos tomorrow, Medvedev postponed his trip to manage the aftermath of the attack.

Russia’s leaders have struggled, with a good measure of success, to keep militants from the North Caucasus from striking in the heartland. But Moscow had been on edge even before the attacks, after ethnic Russian nationalists lashed out violently at migrants from the troubled region in mid-December.

In March, two female suicide bombers detonated themselves on the city’s subway, killing more than 40 people — an act that the Chechen militant leader Doku Umarov claimed to have ordered, promising Russians that “the war will come to your streets.’’

Umarov’s organization also took responsibility for the bombing of a luxury train, the Nevsky Express, which killed 28 in November 2009.

Yesterday’s high-profile attack could also have political implications, coming after a period of tentative liberalization. In the past, such attacks have strengthened the influence of Russian security forces and Prime Minister Vladimir V. Putin by firmly establishing security as the country’s top priority.

The bomber apparently entered the international arrivals terminal from outside, a witness said, advancing to the cordon where taxi drivers and relatives wait to greet arriving passengers.

Artyom Zhilenkov, a taxi driver, said he was standing about 10 yards from a dark-complexioned man with a suitcase — the bomber, he believes. Authorities said the blast occurred at 4:32 p.m. local time, as passengers from Italy, Tajikistan, and Germany emerged from customs.

“How did I manage to save myself? I don’t know,’’ Zhilenkov said, his track suit dotted with blood and small ragged holes. “The people behind me on my left and right were blown apart. Maybe because of that.’’

Another witness told Russia’s state-run First Channel TV that the shock wave was strong enough to throw him to the floor and blow his hat away.

The hall filled with thick smoke and part of the ceiling collapsed, said Spiridonov, the auto rental worker.

Thirty-one people died at the site of the explosion, one in an ambulance, and three in hospitals, the Health Ministry said. Among the wounded were French and Italian citizens, according to the Health and Social Development Ministry. At least two Britons died, said a spokesman for the Investigative Committee.

Witnesses said many of the victims suffered terrible wounds to their faces, limbs, and bodies.

“One person came out and fell,’’ Olga Yaholnikova told RenTV television. “And there was a man with half of his body torn away.’’

Like Medvedev, Putin also appeared on television last night, gravely ordering the health minister to provide aid to all the bombing victims, visiting clinics one by one if necessary, he said.

In Washington, President Obama condemned what he called an “outrageous act of terrorism’’ and offered assistance.

The State Department said it had not received confirmation of any Americans who had been killed or wounded at the airport.