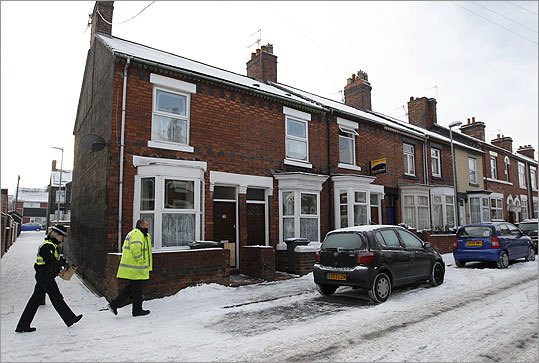 Police officers walked to a house that was being searched in Stoke-on-Trent in England. British police said 12 men suspected of preparing a terrorist attack had been arrested Monday during a series of dawn raids across England and Wales, including four from Stoke-on-Trent. (Darren Staples/ Reuters)
By Paisley Dodds Associated Press / December 20, 2010

LONDON—In the biggest anti-terrorist sweep in Britain in nearly two years, police have arrested a dozen men accused of plotting a large-scale terror attack on targets inside the United Kingdom.

The suspects, who ranged in age from 17 to 28, had been under surveillance for weeks and were believed to have links to Pakistan and Bangladesh, security officials said.

The arrests come amid growing concerns in Europe over terrorism following a suicide bombing in Sweden and reported threats of a terror attack on a European city modeled on the deadly shooting spree in Mumbai, India.

Police swooped in before dawn Monday in coordinated raids on houses in four cities -- London, the Welsh city of Cardiff and the English cities of Birmingham and Stoke-on-Trent. The officers were unarmed, suggesting any planned attack was not imminent.

The raid, a joint operation by Britain's domestic spy agency MI5 and police, was the largest since April 2009, when 12 men were detained over an alleged al-Qaida bomb plot in the northern city of Manchester.

Counterterrorism officials declined to give more details of the latest alleged plot, saying only that the men had been under surveillance for several weeks. No details were given as to whether explosives or arms were found, and searches were under way in the homes where the arrests took place.

"The operation is in its early stages so we are unable to go into detail at this time," said John Yates, Britain's senior counterterrorism police officer.

Still, he said Monday's raids, involving a dozen suspects across the U.K., indicated they were planning something big.

Police have up to 28 days to question the suspects before they must be charged or released.

The men are thought to be British nationals with links to Bangladesh and Pakistan, according to a counterterrorism official who spoke on condition of anonymity because he was not authorized to speak to the media. Britain is home to large Pakistani and Bangladeshi communities.

The arrests were not believed to be part of any planned holiday season attack, said a British security official who spoke on condition of anonymity because of the sensitivity of his work.

"As far as I know, we have not yet found any connection between those arrests and any threats to the United States," Napolitano said in an interview with news anchor Diane Sawyer Monday night on "ABC World News."

Iraqi officials claimed last week that captured insurgents believed the Dec. 11 bombing in Stockholm was part of a series of attacks planned for the Christmas season.

Those claims were rejected by both British and German officials, who insisted there are no specific threats to their countries over the holiday period.

In October, the U.S. State Department advised American citizens living or traveling in Europe to be wary amid reports that terrorists were planning a Mumbai-style attack on a European city.

Some of the details of a Mumbai-style plot directed at cities in Britain, France or Germany came from Ahmed Siddiqui, a German citizen of Afghan descent who was captured by U.S. troops in Afghanistan in July. More than 170 people were killed in the 2008 attack in the Indian city of Mumbai.

A government official downplayed reports that the latest raids were part of larger terror concerns across Europe.

"Although serious, we believe this raid may have been a one-off and not necessarily related to larger European terror plot concerns," said the official who spoke on condition of anonymity because he was not authorized to speak to the media.

Another government official said other plots being monitored within Britain had threads that linked back to the Europe-wide plot reported in October, but that there were no credible reports of a specific Christmas terror plot.

In the U.S., White House press secretary Robert Gibbs told reporters he did not know of any American connection to Monday's arrests.

Europe has been the target of numerous terror plots by Islamist militants. The deadliest was the 2004 Madrid train bombings, when shrapnel-filled bombs exploded, killing 191 people and wounding about 1,800. A year later, suicide bombers killed 52 rush-hour commuters in London aboard three subway trains and a bus.

In 2006, U.S. and British intelligence officials thwarted one of the largest plots yet, a plan to explode nearly a dozen trans-Atlantic airliners.

© Copyright 2010 Associated Press. All rights reserved. This material may not be published, broadcast, rewritten, or redistributed.
More articles in Europe