Will prepare for extradition fight in country estate 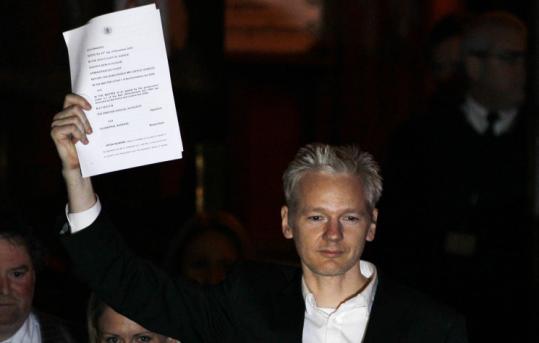 LONDON — WikiLeaks founder Julian Assange was released from a British jail cell yesterday after the High Court upheld a decision granting him bail, allowing him to retreat to a friend’s country estate where he will help mount his legal defense against extradition to Sweden to face sex crime allegations.

Triumphantly raising his fist as he walked out of a central London courthouse, Assange declared, “If justice is not always an outcome, at least it is not dead yet.’’

Describing his nine nights in jail as “solitary confinement in the bottom of a Victorian prison,’’ he went on to thank his attorneys and supporters, including the high-profile backers who posted his bail of more than $310,000, before vowing to continue the work of WikiLeaks as he defended himself in the alleged sex-crime cases.

He was then driven out in an armored vehicle by Vaughan Smith, the London restaurateur and former war correspondent who will now host Assange at his 600-acre Ellingham Hall estate, northeast of London, under what the British press has dubbed “mansion arrest.’’

The 39-year-old Australian, who had to surrender his passport, will be subject to an eight-hour-a-day curfew and surveillance with an electronic tag and must check in nightly with police.

The ruling marks a victory for Assange in his bid to counter a warrant to bring him to Sweden for questioning on alleged sex crimes.

Assange, whose WikiLeaks website has released thousands of classified US diplomatic cables on the Internet, has denied the sex-crime allegations, suggesting they are part of an elaborate plot with the United States to silence his crusade against state secrecy.

Nevertheless, the ruling amounts to a beginning, rather than an end, to Assange’s legal troubles. He must now prepare for a full extradition trial in February.

Given that Britain and Sweden are both members of the European Union, the two nations share an expedited procedure for extradition that is notoriously difficult to defend against. While Assange has suggested the allegations are politically motivated and aimed against WikiLeaks itself, his lawyers will now be faced with the prospect of somehow proving that theory.

Assange was jailed on Dec. 7 after turning himself in to British authorities. A judge initially refused his request for bail based on the assumption that the nomadic and elusive WikiLeaks mastermind was a flight risk. That same judge reversed his decision on Tuesday, after Assange’s backers provided him with a fixed address and Assange agreed to undergo heavy surveillance while out on bail.

Swedish authorities have said they had no position on whether Assange should be freed or held behind bars while he fights the extradition warrant. But British prosecutors independently appealed his release to the High Court yesterday, arguing that Assange might yet find a way to disappear from under the noses of authorities.

“I’m very happy with the decision. I can’t wait to see my son,’’ Assange’s mother, Christine Assange, told reporters from the courthouse steps. She continued, “I had faith that the British justice system would do the right thing.’’

The legal proceedings promise to be protracted. His full extradition hearing is not scheduled to be held until Feb. 7 and 8, with likely appeals potentially dragging out a final verdict for weeks or months longer.

Stephens said Assange’s supporters had made good on their promises to financially back him. In addition to the $310,000 in cash, he was also required to post financial pledges for an additional $70,000.