Reports say man killed in blasts was a suicide bomber 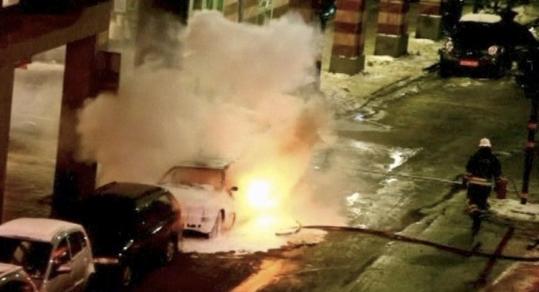 STOCKHOLM — One man was killed and two people were injured when two explosions hit the heart of Stockholm’s city-center shopping district yesterday evening, police in the Swedish capital said. The country’s foreign minister called the blasts a terrorist attack, and an e-mail to news organizations minutes sent before the blasts seemed to link them to anger over anti-Islamic cartoons and the war in Afghanistan.

The police said that a car parked near the busy shopping street of Drottninggatan exploded first, shortly before 5 p.m. Stockholm time, and that the wreckage of the vehicle included gas canisters. A second blast followed minutes later, about 200 yards from the first. A man’s body, with blast injuries to his abdomen, was discovered after the second explosion.

Swedish newspapers portrayed the dead man as a suicide bomber, and the newspaper Aftonbladet said on its website that he had been carrying pipe bombs and a backpack full of nails. But police declined to confirm this.

“We are in the middle of a technical investigation, and we are working methodically to find out what happened,’’ said a police spokeswoman, Petra Sjolander, who refused to speculate about whether the blasts were a terrorist attack.

Still, comments from Foreign Minister Carl Bildt on his Twitter account did not attempt to hedge the issue. His post read: “Most worrying attempt at terrorist attack in crowded part of central Stockholm. Failed — but could have been truly catastrophic . . .’’

An editor at the Swedish news agency Tidningarnas Telegrambyra, Dan Skeppe, said the agency had received an e-mail minutes before the blasts; it was also addressed to Sweden’s security police and included a sound recording addressed to “Sweden and the Swedish people.’’ Skeppe said the recording cited Swedish “silence’’ over cartoons of the Prophet Mohammed drawn by the artist Lars Vilks, criticized Sweden’s 500-soldier military contingent in northern Afghanistan, and threatened attacks on Swedes.

“Now, your children — daughters and sisters — will die like our brothers and sisters and children die,’’ it continued. “Our actions will speak for themselves. As long as you do not end your war against Islam and the insult against the prophet and your stupid support for that pig Vilks.’’

The Stockholm blasts seemed certain to cause widespread shock in Sweden. The country has long prided itself on having created a stable and peaceful society at home, and on having avoided involvement in the upheavals that have ravaged much of the rest of Europe in modern times, including World War II.

It has previously escaped the types of bombings mounted elsewhere in Europe since the 9/11 attacks in the United States. And the Swedish military’s current deployment in Afghanistan, centering on signal intelligence operations, is an unprecedented example of its taking part in a NATO-led mission under US command.

But rising Muslim immigration and the furor surrounding Vilks have contributed to a rise in tensions that have led to increased support for a right-wing anti-immigration party, the Sweden Democrats, which won 20 seats this summer in a general election. The party, blaming immigration for increased crime rates, has focused its ire on the Muslim population, which accounts for about 5 percent of Sweden’s 9.3 million people.

The recorded message sent to Swedish news organizations demanded that Muslims in Sweden “stop sucking up and degrading yourselves,’’ and broadened the appeal to “all mujahedeen,’’ or holy warriors, in Europe.

“Now it’s time to attack,’’ it said. “Do not wait any longer. Come forth with whatever you have, even if it is a knife, and I know that you can bring more than knives. Fear no one. Do not be afraid of jail. Do not fear death.’’

Skeppe said the address in the e-mail indicated it had also been sent to Sweden’s security police, but there was no indication what sort of an attack was planned, or when.

Publication of Vilks’s drawings in Swedish newspapers drew widespread condemnation in the Muslim world and death threats against the artist.