Substance kills 4 and injures more than 120 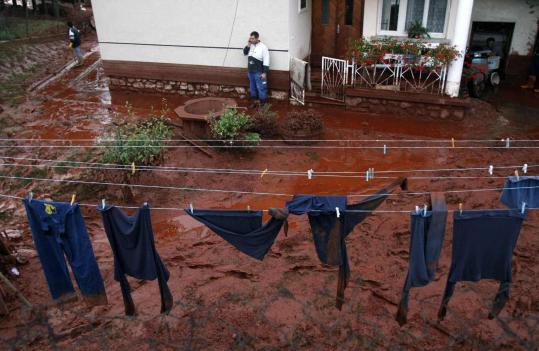 PRAGUE — The Hungarian government declared a state of emergency in several towns yesterday, a day after a reservoir at an alumina production plant in Ajka burst its banks, unleashing a flood of toxic red sludge that killed at least four people and injured more than 120, government officials said.

The flood, estimated at 185 million gallons, swept cars off roads, damaged bridges and houses, and forced the evacuation of hundreds of residents. People who came in contact with the substance were burned through their clothes.

“People here speak of a mini-tsunami,’’ said Gyorgy Bakos, spokesman for the National Directorate General for Disaster Management, who was close to the scene of the accident.

Hungarian environmental advocates said that the spill could have devastating environmental consequences and that it threatened to pollute the Danube River, causing long-term damage to ecosystems and killing fish and vegetation. The agricultural soil that is now under the sludge will have to be replaced at a potentially high cost, they said.

Authorities and emergency services evacuated residents from Kolontar, Devecser, and Somlovasarhely, in southwestern Hungary, and set up makeshift camps in schools and community centers.

In addition to the dead, who appeared to have drowned, five people were missing, and 7,000 residents were affected by the spill. About 60 people were hospitalized, according to the National Directorate General for Disaster Management.

Zoltan Illes, state secretary at the Environment Ministry, who was also in Devecser, called the spill an “environmental disaster.’’

The sludge leaked and flooded the towns through the Torna River. Some 270 homes were quickly engulfed. The sludge spread over 16 square miles, according to the Environment Ministry.

Residents in Kolontar, not far from where the accident occurred, tried to rush from their homes as a wave of sludge 6 feet high pushed its way through homes and narrow streets.

Gabor Figeczky, deputy country officer of WWF-Hungary, an environmental group, said the main threat from sludge was that it is very alkaline, with a pH as high as 13, making it a caustic detergent that could burn.

Figeczky said the environmental risk was created by the highly alkaline substance flowing into rivers and killing all life there. He said it remained unclear whether rainfall and upstream water could help dilute the caustic mud in the river and avert more damage to the larger rivers downstream.

“There hasn’t been such a spill of this red sludge before anywhere,’’ he said.

The Hungarian Environment Ministry immediately ordered the owner of the Ajka alumina plant, MAL Zrt, the Hungarian Aluminum Production and Trade Co., to suspend all operations.

Viktor Orban, the prime minister, appealed for calm. “There are grounds for panic, and this is understandable,’’ he told reporters.

He added that the government had set up a team of experts to analyze the accident, which he said might have been caused by human error and showed no signs of having been the result of natural causes. He stressed that there was no threat of radiation in the area affected by sludge.

Red sludge, also known as red mud, is a byproduct of the refining of bauxite into alumina, the basic material for manufacturing aluminum, according to the Aluminum Association, an industry trade group based in Arlington, Va. The sludge, a waste product in production, contains heavy metals and is toxic if ingested, scientists say.

The plant’s owner issued a statement yesterday afternoon saying that “the red sludge waste is not considered hazardous waste,’’ according to European Union standards.